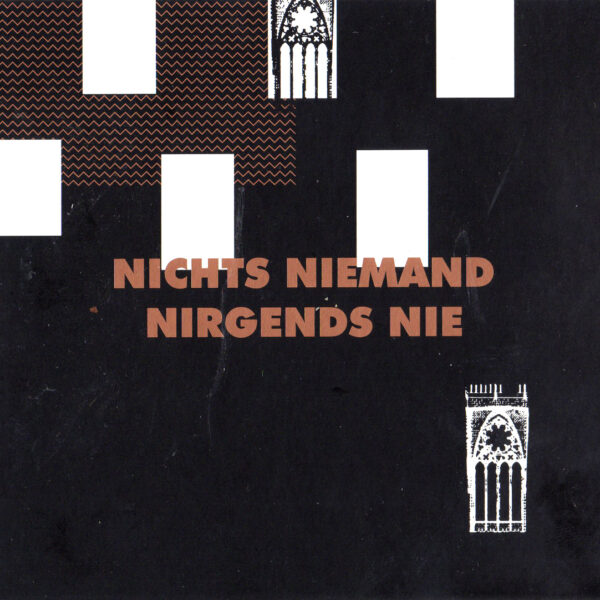 Here’s the third CD just prised out of the P16.D4 Passagen (MONOTYPE RECORDS mono58) box set. The story of Nichts Niemand Nirgends Nie is quite involved; originally released as a double album in 1986, it was a collaboration between P16.D4 and S.B.O.T.H.I., the latter of course being Achim Wollscheid who was the co-founder with Ralf Wehowsky of the important and seminal Selektion Records label. On this CD, we’re only getting the tracks from that double LP which were directly attributable to P16.D4, a selection process which thus excludes those tracks explicitly “composed” by Achim. However, since Achim transformed a lot of the original sounds on P16.D4’s studio tracks, it’s not always crystal clear where one man’s input leaves off and another begins. This amorphous and rather “blendy” quality seems to have permeated the whole of this record of 1985 recordings; somewhere, we seem to have lost a few rough surfaces and sharp edges, and the music / sound is generally less “prickly” than the two cactus plants I have impaled my ears on previously. However, the radical and rugged experimentation that characterises P16.D4 is clearly still in evidence. There are lots of conventional musical instruments being played, apparently – the track notes list them meticulously – but virtually nothing sounds familiar to our ears, bar the occasional moment of church organ which makes its way into the strange sonic minefield of ‘Virtuelle Altare’. Everything else – piano, double bass, synths, guitars, piano – has somehow been refashioned into various concoctions of evil, swamp-like gloop, pulsating with the life of a million teeming insects from Hell, and glowing with an eerie incandescence which we can only attribute to nuclear irradiation. One swallow brings the Spring, or at least a fatal ingestion of Plutonium.

As to “concept” and “realisation” of the music, RLW and Stefan E. Schmidt are responsible for the lion’s share of the studio tracks, although Roger Schönauer gets a credit on the highly memorable ‘My Last Words Will Be…’, a somewhat bleakified and ambiguous journey through a slow-moving fog, a yellow fog that thickens and coagulates the more we press on. It’s from the original side C of the double LP, so it’s live recordings – this particular project deploying pre-recorded tapes, played by two separate groups of participants. The use of the swimming pool as an instrument here is commendable. You could use ‘My Last Words Will Be…’ to induce a cheese-infested dream that would alarm any one of Windsor McCay’s Rarebit Fiends. This process-heavy album culminates in the only way it can – by recycling elements from the rest of the double LP in an orgy of reprocessing, and accordingly we get the pre-programmed chaos of ‘The Other Cellophane Upsurge’, where in just 8 and a half minutes RLW and Schmidt manage to make even the most solid of everyday objects appear doubtful, ambiguous and unfamiliar. If they’d been architects, they would have constructed a block of flats with disappearing floors that drop the dwellers to their doom in a pit full of bones, and ceilings that flip over 180 degrees to release a colony of live tarantulas into the room. NNNN – as RLW refers to it, for convenience – is superficially easier on the ears than the fragmented and reassembled rubble we’ve heard so far in the box, yet that sense of safety is a complete illusion. The record is in fact made even more subversive by dint of its smooth corners and gently sloping pathways; it’s a dose of strychnine concealed inside a chewy caramel. The CD release includes a 1991 piece, ‘Ephemeral March of the Dead Monks’, which was selected because it reused some of the live material from the original 1985 project. It’s coming from the same dark corner of the brain as ‘My Last Words Will Be…’, may even have some of the same content, yet is more extreme, spooked-out and ghastly than its brother, an intensified re-experiencing of that dream, only with a stronger brand of cheese.