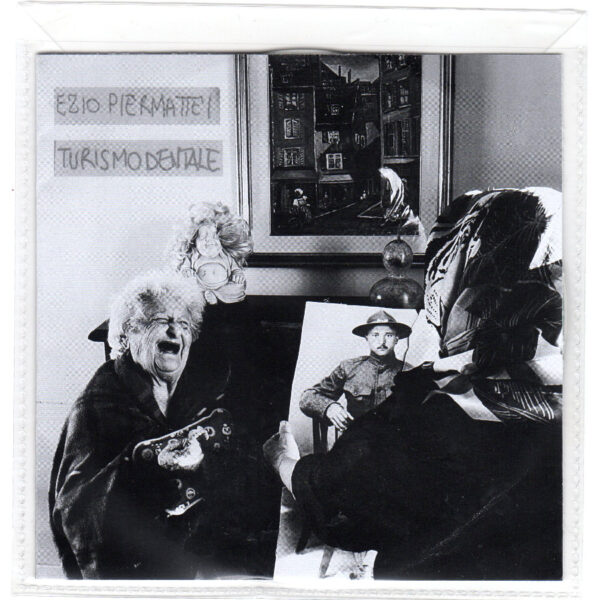 Ah, another package from my favourite Italian loon of tape cut-ups and weird performed music, Ezio Piermattei from Bologna. As you know we’ve been besotted with his bizarre work since 2012, and he has published statements under the names of Hum Of Gnats, poisucevamachenille and Autopugno. One of the things I enjoy most is his very low profile. He doesn’t have much of an internet “footprint” and it’s hard to find out any known facts about him, although admittedly when writing this I found there is a recent 2014 interview conducted by The New Noise (in Italian). The cassette item here (MY DANCE THE SKULL MDTS 10) is a team-up with Dan Melchior, the English singer and songwriter who has a real “everything and the kitchen sink” approach to production, layering in as many events, styles and techniques as the tape will support, the better to frame his very eccentric and humourous songs. We liked his 2011 album for Northern Spy. Ezio and Dan apparently met up at the 2013 Colour Out Of Space festival, and this clutch of six tunes resulted from the meeting of minds. Dan’s clearly toned down his usual raucous approach in favour of something quieter and more introspective for the collaboration. It’s been assembled from acoustic instruments (clarinet, guitar, piano, percussion), mixed up with strange voices and sung elements, and laced liberally with pre-recorded tapes, found recordings, and field recordings. Fractured, fragmented, and all but incomprehensible – these are glimpses into the workings of two unique human brain-pans, piecing together scraps of recorded information as though they were tentatively drawing a map that would make sense of the world. On the B-side, we also hear the voices of Letha Rodman Melchior and Barbara Gileno on ‘Two Tiny Kingdoms’, voices apparently engaged in a telephone conversation that’s taking place in outer space, to the accompaniment of uncanny drones and unsettlingly distant music. A true curio, a compelling and vaguely disturbing brain-melter.

The other item is Turismo Dentale (CHOC 284), a CDR on Dylan Nyoukis’s Chocolate Monk label, a release which may also have come out of the Colour Out Of Space event. This one is mostly a solo effort by Ezio although Barbara Gileno appears as guest trumpet player on one of the untitled seven tracks. Created from “voice, objects, instruments, tapes, electronics, etc.” this is a highly perplexing and unfathomable trawl through sound-episodes of great absurdity and surprise…we never really understand what we’re hearing, how it’s made, or what it means, but it’s impossible to stop listening…here, Ezio Piermattei doesn’t deal in loud noise or shock tactics, and the album is quiet, acoustic, mysterious and just plain strange throughout. But it’s also delivered in a very “clean” manner, by which I mean he doesn’t appear to be transforming his sources much through distortion, or passing the sounds through effects, although there is much tape manipulation (wrong speeds); most of the craft and genius appears to reside in recording, selection, layering, and assembly. Some there be who like to over-process their sounds until they become thick mud, or porridge, but instead Piermattei offers the pure distilled liquids of balmy madness tapped straight from the cerebellum. As on the cassette, the use of recorded voices and spoken word is very effective, and hearing a recognisable human element helps prevent the music from becoming overly abstracted. Speaking of voices, we should also mention the vocal contributions of Nonna Lea and Mamma Emilia, who are apparently photographed on the cover. One look at the back cover tells you that you don’t want to mess with these two tough birds, and that you couldn’t tell them anything they don’t already know. One look at the front cover is enough to convince you that there’s surrealism and poetic beauty to be found in most domestic situations, though it’s rare there’s a photographer on hand with the skills to capture it. Nonna Lea sings for a few precious seconds on Track 4, while the two of them (unknowingly?) create a piece of absurdist sound poetry on Track 7 that Kurt Schwitters would have given his left big toe to utter. Their crusty vocal tones are set against a foreboding organ drone and church bells, producing what to my mind is an effective rendition of a De Chirico painting in sound. Unique. From 19 Setpember 2014.