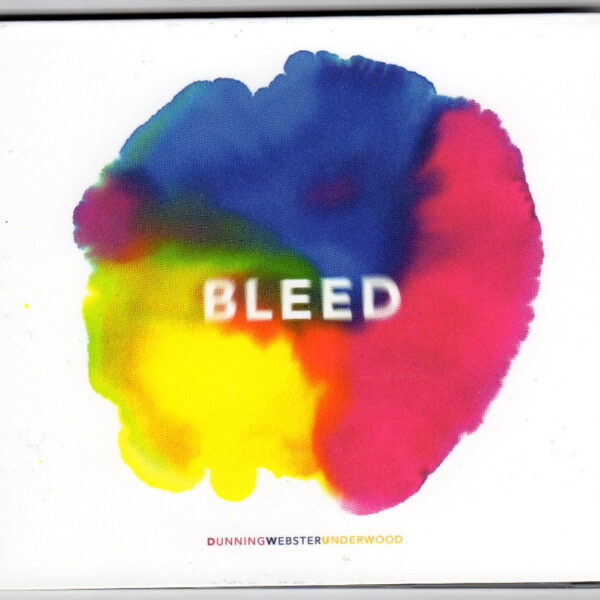 Bleed (ADAADAT ADA0039) is a very good studio recording of English improvisers Graham Dunning, Colin Webster and Sam Underwood, the latter two blowing baritone sax and tuba respectively while Dunning is up to nine types of backstage malarkey with his turntable and electronic effects. The two brass players kind of rule the roost of most of the cuts, occupying as much space as they’re able with their deep-rumbling growling devices which push the air like bulldozers, and as a result of their efforts the album could be split into two basic moods: one, long meditative drones which betoken the foul thoughts of a man plotting revenge, scowling at the world while he silently hatches schemes of violence, mayhem, devastation and pain against his numerous enemies; and two, a clumsy flailing about in agitated mode, as though an agonised mental patient were trying to free himself from his straitjacket. He’s also about eight feet tall and has the physical attributes of two separate gorillas, so all we can do is lock him in the rubber room to prevent any breakages. During these fits, numerous howls and muffled shrieks are audible. Given these scenarios, it’s far from happy music, but it still tugs hard at some deep-down, long-buried emotions, and is thus highly expressive and cathartic. Besides acting as bulldozers, the sax and tuba could also be used as winches to hoist up these suppressed feelings from the deep well of the psyche.

We’ve heard Dunning and Webster pair up before on the excellent Estigate, and to hear Webster honking live in a trio situation you need a copy of Languages Live At Vortex from 2013, which Stuart Marshall found to be “incendiary”. Tuba player Sam Underwood is a new name to these pages, but it turns out he’s also a sound artist and creator of musical instruments, and has appeared in the group Ore and under his own alias Glatze, where in at least one case he appears to exhibit an interest in combining deep brass drones with electronic effects – which makes him a prime candidate for this project. As for Dunning, the “fractal meat” escapades of this wide-ranging multi-media fellow are worth investigating, and I’m impressed at the restraint he exhibits on Bleed; his interpolations from turntable and electronic boxes are few, and highly subtle. They consist largely of adding a certain amount of gritty texture where it’s needed, to help the lumbering brass players ascend the mountain of misery they’re creating, by slipping a little sand under their climbing boots. Dunning doesn’t make with the annoying whoops, howls and crazy juxtapositions that we used to hear from jokesters like Stock, Hausen & Walkman with their cassette tapes thrown at random into improv situations, and his plan is clearly not to call attention to himself.

Given the general lack of “skittery” playing on this release, and the track record of those involved, it gives me a glimmer of hope as a possible new avenue of development for English improvised music. From 7th August 2015.