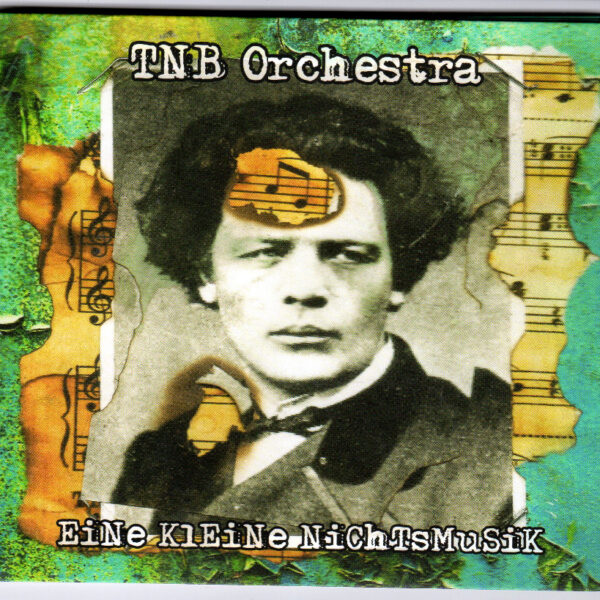 I see The New Blockaders are still issuing product…this is clearly one old noise-music warhorse that won’t lie down and give up the ghost, so I’d better quit trying to ring funeral bells or write eulogies, since it’s clear that Richard Rupenus and his gang will bury me first. I feel that over the years I’ve been listening to far more records than The New Blockaders than I actually want to, and this includes two enormous vinyl box sets of recordings (Viva Negativa) made by other artistes as a “tribute” to TNB; for this reason I always think I haven’t much more to write on the subject. However, EiNe KlEiNe NiChTsMuSiK (HYPNAGOGIA GIA08), credited to TNB Orchestra and sent to us by Paul Coates of Hypnagogia, is quite a surprising listen.

Overwhelmingly, the CD contains two untitled suites at 39 minutes apiece, making this “double-album” length, and it’s described as “compositions musicales pour bruiteurs”. I find it surprising because it’s an improvement on the harsh noise wall assault which I’ve associated with most of this project’s output, and contains layers of exciting sounds and variations swimming around the usual violent, non-musical, grind and rumble of inert concrete death. True, the remorseless industrial factory wheel-spinning and bone-crushing monstrosity continues its inhuman work and dominates the space, but lurking in the dense and chaotic swirl of horrors there seem to be lurking sweeter roses and cherry-like fruits, ripe for the picking by one’s damaged ears. In other words, such matters as dynamics and textures – two things that were previously “verboten” in the cruel Rupenus manifesto – suddenly start to figure in the new regime.

This might point to an ongoing change in personnel, a change which may even be reflected in the name “TNB Orchestra”, but in order to protect the Rupenus brand, the notes remain silent as to exact names. That said, Michael Gillham and Hal Hutchinson were given credits on Schadenklang, the 2012 release that we noted here. However, equally plausible is the idea that this CD is simply a condensation of tracks (maybe all of the tracks!) from Viva Negativa, layered one on top of the other to produce an overpowering, impossibly-dense cloud of remixed noise. The copyright assignation on the label, which credits “TNB & The Respective Artists 1982-2006”, adds some weight to this theory.

If I ever get nostalgic for the old-school, brutalist method of TNB which allowed for no mercy, remorse, or even fresh air in the equation, I suppose I can turn to my four-CD box set of their greatest early works; but today I’m enjoying this monstrous noise assault more than I would have thought possible. It’s more like extreme electronic sound than “pure” noise, and might even repay further investigations…at least I’m not left with the usual sickening sensations of futility and despair that Rupenus normally induces with his poisonous wares. Technically, this 300-copy version is a reissue; the original came out in 2013 pressed on a CDR, with hand-made packaging which involved partial hand-colouring, burnt images, and fragments of sheet music inserted in the jewel case. 50 unnumbered copies were issued, and presumably sent out to a chosen few; I’m not sure how commercially available it ever was. That edition is a collector’s item already, commanding prices of £100 or more. From 15 December 2015.