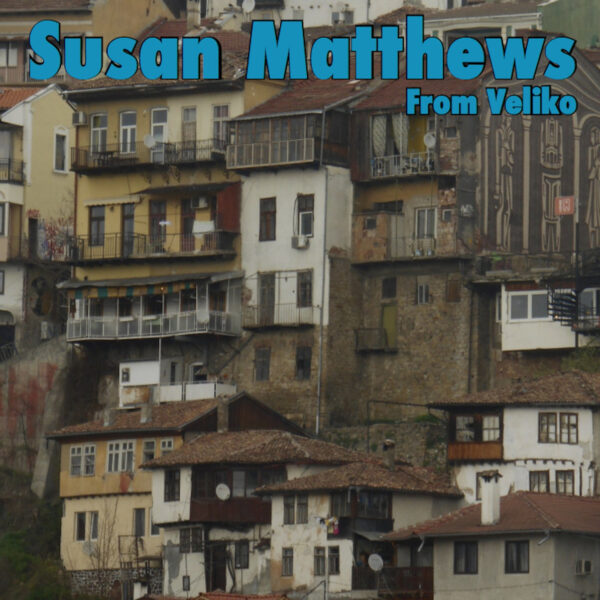 Welcome return to these pages of Susan Matthews, the fey musician from South Wales from whom we haven’t heard since A Kiss For The Umbrella Man, her highly personal take on the music of Erik Satie, noted in 2012. Her record From Veliko (SIREN WIRE RECORDINGS SW108) is a shortish work, just three tracks in 14 minutes, but it’s a very heartfelt statement. Piano, keyboards, voice and field recordings are used to create a spell-binding mix of songs, tunes, mood pieces, and poetic observations, and the theme is highly emotionally charged. Part of it is derived from an actual trip to Veliko Tarnovo, and the artist’s take on wandering around this beautiful medieval city. She was particularly struck by the hanging houses, which are poised on the edge of a gorge above the Yantra river and in imminent danger of falling into the water, if they haven’t already done so. Crumbling foundations, ancient buildings, clinging onto a precipice – it doesn’t require much imagination to apply these elements to the human condition, and realise how close we all are to tipping over into melancholy, despair, or even madness. Matthews also alludes to “a metaphor for a psychological journey from the darkness of depression back towards the light”, a highly personal revelation, and one which takes some fortitude to admit to and deal with. If Susan Matthews is working out her personal problems through music, she has succeeded admirably with this understated yet highly cathartic music; I defy anyone to hear her fragile voicings and subdued but intense piano work on this record without being deeply moved. From 17th October 2016; was also released by Pilot Eleven.