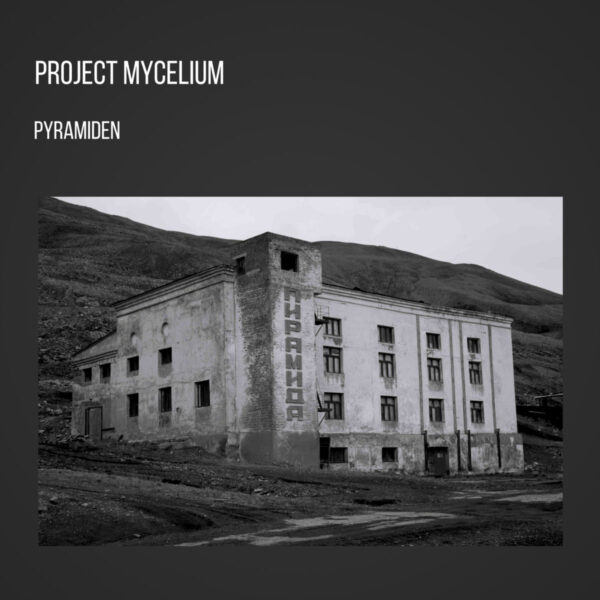 The Pyramiden EP (LINEAR OBSESSIONAL LOR 088) is by Project Mycelium, a duo of electronic musicians Luke Brennan and Lorenzo Santangeli from Hackney; they describe their working method as piecing together “minimalist fragments of acoustic samples”, and have previously had a short record called Pulse released on this label. Pyramiden is derived from the sounds of water and steel, and appears to be themed on ideas about mining; at any rate, the accompanying PDF file features a series of colour photographs taken by Mary Pearson, depicting a disused mining installation. This locale turns out to be a part of Norway annexed by Russia in 1925, when they claimed mining rights; nobody lives there now though, and the installation is completely abandoned.

We have noted before how disused industrial sites (especially mines) evidently have a particular fascination for visual and sound artists, and recent instances of this trend include Franck Vigroux’s Entrailles and Ogrob’s work investigating the Staffelfelden mine shaft. I kind of like Pearson’s photos, even though they are very prosaic, because they fit into the overall pattern of her work and her concerns; among other things, she is frequently drawn to remote and hostile environments, and you can’t get much more forlorn than Pyramiden, this distant part of Isafjordur on the west coast of Spitzbergen. At least she actually visits these places to get her photos, presumably exerting some physical effort and undergoing hardships thereby, whereas I doubt if Brennan and Santangeli even strayed very far from their hip pad in Hackney to create this weedy effort. Their music as Project Mycelium is competent enough, but a very pedestrian reworking of water and steel sound samples, resulting in a plodding, literal sound-picture of what they think a mineshaft might sound like. Very ordinary piece of lite-industrial textured noise. From 25th November 2016.