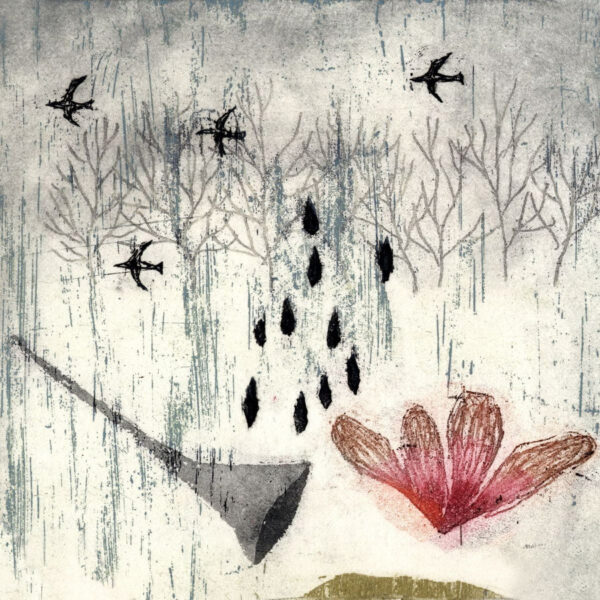 The Miracles Of Only One Thing (SUB ROSA SR439) is a studio team-up of Keiji Haino with two eminent Belgian players, the drummer Teun Verbruggen and the pianist Jozef Dumoulin, here performing on the Fender Rhodes electric piano. Dumoulin has come our way before as part of the duo Lilly Joel, noted by Stuart Marshall for their nocturnal and dream-like qualities. This Miracles team-up record is not one to take to bed if you want a peaceful night’s sleep, though. It’s cluttered, noisy, and contains an ill-fitting mix of stylistic approaches. The players tear through their work as though the world was going to end yesterday, and even the quieter passages seethe with hostility and barked menace. Most of that barking is down to the Japanese third of the act, of course – and it’s good to know that Haino hasn’t abandoned his “tortured man” vocal hysterics after all these years. He also mangles his guitar in typically over-wrought fashion, but the sound that keeps rising to my foreground is something that resembles a monstrous Theremin, growling discontentedly like a caged beast sitting on a sideboard. I can’t work out if this sound is Keiji’s guitar passed through a jillion effects boards and processors, or the live electronics work of Verbruggen. Either way it’s both delicious and faintly nauseasting.

The main events from these 2015 sessions, recorded when the Belgians were on tour in Japan, are two epic assaults called ‘Non-Dark Destinations’ and ‘Hotel Chaika’, both of which are nightmarish endurance tests that drag the listener down endless tunnels of aggression and chaotic emotions; even with the precise, jazz-like drumming of Verbruggen I’m still experiencing that unwelcome “sucked into a vortex” sensation that I haven’t felt for a long time with any Haino project, so maybe this unpleasant roller-coaster ride is a blessing in nylon tights. On the ‘Non-Dark’ track, there’s a grotesque pattern of distorted and ugly notes resembling music from a carousel ride going massively wrong – I’ll assume for the moment this is the Fender Rhodes of Dumoulin, and if it is then we’re a long way from the affable world of Joe Zawinul and his tasteful fusion chordings. The latter passages of ‘Non-Dark’ contain some noteworthy git-twangs from the Japanese Blackster Dude, sheer reverso-rockabilly madness dredged from an alternative history of the Southern states. But while this track has many powerful rushes, it’s also an ungainly sprawl – the untidiness of self-indulgent improvising threatening to collapse into flailing gibberish at every turn, with none of the perpetrators quite sure when and where they should leave off. ‘Hotel Chaika’ exhibits similar characteristics, and if anything is even more episodic; while I like the violence implied in these heart-attack dynamics and constantly-shifting boundaries of the musical arena, it’s also damned hard for a listener to get into the rhythm or spirit of this formless work.

There’s some relief on the third track (whose title offers some typically Zen-like observation about snow, light, and winter) which is at least cohesive, quieter, and packed with many mysterious glistenings as we enjoy a happy confluence of metallic percussion, electronic crackles and purrs, and perhaps some breathy flute work from He in the Eternal Shades. There is definitely a flutey moment or two on ‘Tonight’, a piece which does seem to make good on Keiji’s plan to achieve uncanny levels of proficiency in every musical instrument ever made; for some reason the two Belgians just get in the way here, and their rather random non-jazz doodles and stabs don’t add great value to the performance. The front cover artwork is nice, but doesn’t really convey much about the music on this rather hit-or-miss album. From January 2017.