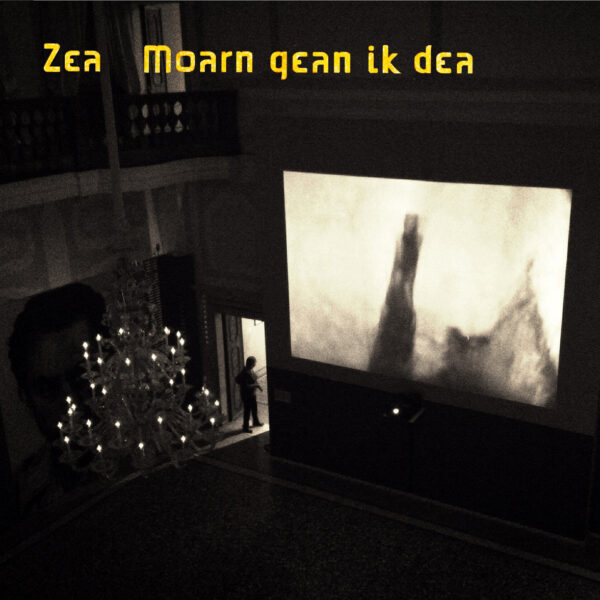 We heard Zea in 2015 with his record The Swimming City, which I recall as an eccentric clutch of songs delivered in a rather manic fashion by this Dutch outsider Arnold de Boer (who also plays in The Ex). His newie Moarn Gean Ik Dea (MAKKUM RECORDS MR 20 / SUBROUTINE RECORDS SR079) is far less frenetic, no guest players this time, and it’s all performed by him in a stripped-down lo-fi manner with voice, acoustic guitar, mostly “unplugged” but with occasional electronic blats punched in from hammering sampler device.

The intimacy of it hits you first; it’s more like a very direct lecture delivered by a very determined fellow, rather than an album of entertaining songs. The singer-songwriter genre has evidently moved on by eons since the days of James Taylor and Janis Ian. While his performances have conviction and strength, de Boer’s idea of a structured song is as something disconnected, provisional, packed with hesitation and uncertainties. The lyrical content matches this plan, and each song is a tiny portrait of modern alienation, with little plain-spoken phrases and observations that suggest a mind unable to make much sense of the world; he veers from tiny details which somehow demonstrate the futility of daily existence, to raging blindly against unseen enemies and unknowable forces, along the way always retreating to a private, internalised world of his own confused feelings, a tiny room hidden behind shuttered windows and closed doors.

I’m able to make these remarks because luckily there’s a printed insert with the lyrics in English; the actual album is sung in Frisian. Frisian is de Boer’s first language, a West Germanic tongue spoken in parts of Holland, which may have its roots in the middle ages; it seems to have about eight distinct dialects, and is just the sort of obscurity to inspire zeal in the hearts of activists and conservators. I was interested to learn that Frisian gained official status as a minority language in 1956. I’m assuming that Zea is pro-active and protective about Frisian, not just to the extent of making this album in the language, but also because of his stated mission: “I want to instil the world with Frisian like Whitney Houston has taught the world English”, a proclamation that’s both ambitious and extremely loaded.

It’s hard to argue against the notion that English and American rock music have been forces for cultural imperialism since 1945 onwards, but why pick on Whitney Houston as the pin-up girl for that agenda? As to Zea’s plan to reverse this imperialistic trend towards monoculture and blandness, making a stand for parochialism, I’m all for it…I look forward to more protectionist singers and bands doing likewise for their mother tongue. Datblygu, for instance, had a good innings in the 1980s and 1990s promoting alt-rock and hip-hop sung exclusively in Welsh. But where are all the Manx-speaking rock bands? At any rate, despite dour tone and suicide-inducing lyrics (the LP’s title translates as Tomorrow I Will Die), this is a highly personal record and a strong politicised statement by Zea. From 11th April 2017.