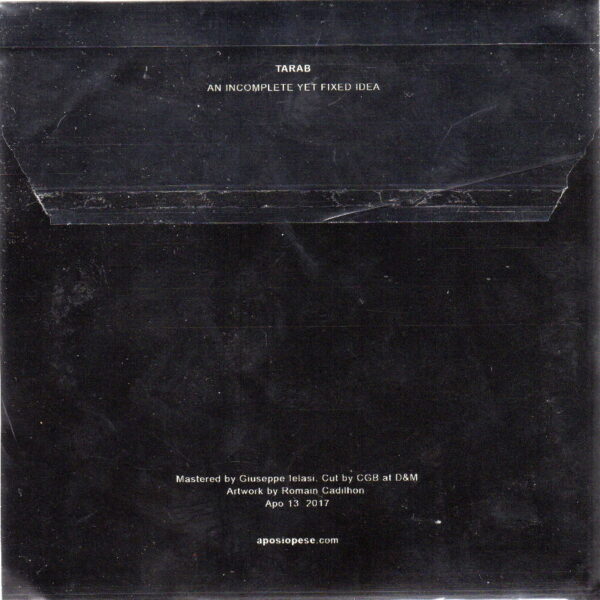 Tarab is the Australian fellow who’s very preoccupied with landscape and objects and weather and such, and is probably not far apart from his American counterpoint Jim Haynes. Matter of fact Tarab appeared on a label associated with Haynes (23five) for his last release I’m Lost which caused reviewer Jennifer Hor to start compiling sympathetic shopping lists of stuff she could hear on these aural dramas – concrete and plastic bags which appeared to be covering up the countryside, submerging it, even. I suspect Tarab is not one to ignore rubbish or garbage as he dons his field-recording boots and traverses heaps and hillocks with his roving mikes, in fact I expect he positively welcomes it and documents the detritus of our throw-away culture with seriousness and rigour.

None of this necessarily applies to today’s record, An Incomplete Yet Fixed Idea (APO 13), released on the French label Aposiopèse. But we can sense the deliberately aimless manner in which he conducts each daily trudge around the forbidden zones where few dare to tread, letting the tins cans fall where they may. Two suites of around 20 minutes each comprise what is evidently a series of collages, where interesting diaristic snapshots and sound-photos are cut and pasted together and arranged in an order – though nothing so ordinary as a photo album order, with captions and numbers – which makes intuitive sense to Tarab, as he scuttles about the terrain much like the scarab beetle he so much resembles (in name, at any rate).

This restless collage method makes the entire record extremely interesting and mysterious, an exciting trawl through unknown terrains, represented by multiple timbres and tones that don’t really match up. Seagulls and roaring waves slug it out with industrial tanks and metal drums rolling about, and plenty of other bumpety-drone-clunky-battering sounds that are hard to identify, emerging as merely abstract blurs and streaks when processed by the microphones. In doing this, Tarab creates a strongly kaleidoscopic and fragmented view of the modern world, as he attempts to make some sense of it. Or perhaps, rather, the opposite; he attempts to reveal the underlying chaos and absurdity of the surface world. This intensive study of earthly topography has been released as a CDR in a near-black cover; hard to believe someone took the credit for this simple black artwork, but it’s by Roman Cadilhon. From 16 May 2017.