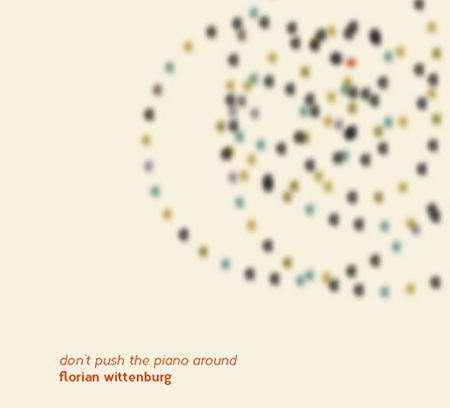 Despite having migrated to more conventional sound sources since we learned of him several CDs ago, Florian Wittenburg remains attentive to the depths and dynamics of whatever he’s showcasing. His treated samples of the glassy messertisch in Artefacts (2011) elicited a squeamish sort of slumber, while Eagle Prayer (2016) supplanted the surface-scoring with glass-bowing (i.e. bowing the wine glass like a cymbal). It also brought the composer’s beloved piano into the fold, which receives a fuller reception in Don’t Push The Piano Around (NURNICHTNUR 117 01 26). The title’s imperative mood summarises the foray’s forceful sensitivity: though commonly handled like it’s about to crumble away, the piano is schooled in Wittenburg’s taste for subtle but jarring contrasts, and just a hint of the electronic treatment of heretofore (‘Quotes pt.6’). The hands on the keys belong to Sebastiaan Oosthout (also credited for ‘whistling’ in the final piece), seemingly well-steeped in the history of minimalism, who carries off the compositions as a swirling blend of cautious keystrokes and mind-numbing repetition, in which subtle tonal variations become distinct over time; remaining somehow suspended in the air even after the event has passed.