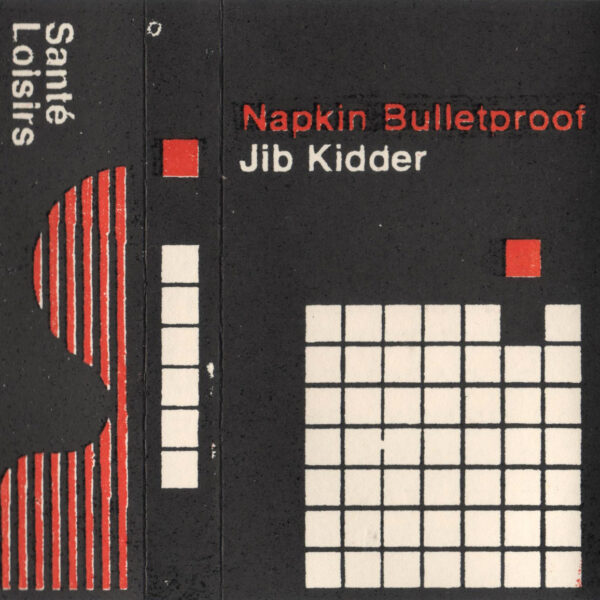 Got a couple of cassettes from Eric Kinny’s Santé Loisirs label, formerly of Mulhouse in France and now in Belgium. Always a pleasure to receive these oddities, as the releases are always unusual, heartfelt, and genuine statements by marginal artistes, and nicely presented with colourful artworks. We last heard from him in December 2016.

Jib Kidder evidently had a metric tonne of fun making all the sounds on Napkin Bulletproof (SL09), a clutch of 17 short tunes which were originally recorded in 2006 and released on CDR by Capt. Bass. Made with a combination of live playing (guitar, casio keyboard) and samples lifted from records and cassettes, the tunes are a kind of suburban-modern folk blues, except the guitar plays wayward and meandering non-tunes instead of standard 12-bar shapes, and any vocal interjections seem to be coming from the decontextualised morass of a record collection. Each tune is interspersed with vaguely odd and puzzling electronic blarps and pweeps, decorating them and adding to the balmy insouciant air. To further the absurd atmosphere, all the track titles were taken from spam emails (an old trick perhaps, but a good one). Napkin Bulletproof is largely upbeat, sunny, optimistic, despite all the oddness abounding; in this land, it’s a perpetual sunny day, slightly woozy in feel, as if reality were being deflected by a glass of Chardonnay laced with a couple of goofballs. Eric Kinny’s label is just the right home for it; Santé Loisirs acts as an asylum for happy zanesters and eccentrics. Jib Kidder were a trio that at one time included Christina Schneider and Zach Phillips in their ranks; both have appeared on this label before. We also heard Jib Kidder in 2010 with a split LP they made with Earzumba for Old Gold. We hear Zach Phillips again on Headlight (SL10), where he teams up with guitarist Calvin Grad and adds his Wurlitzer electric piano as support to the songs. Not sure who is singing, or who wrote the lyrics here…the songs certainly have the sort of peculiar air and oblique lyrical content I would associate with Zach, but the melodies are slightly more approachable and easier to follow than Zach’s usual layered trickiness. Like the Napkin tape above, it’s enjoyable and filled with sunlight; harmless fun and carefree simply joys await those who visit the Headlight world. There’s an honesty and a clarity with which each song is delivered, neither player has anything to hide, and only the most hard-hearted listener will fail to be beguiled. The cover is created by woodblock printing by Eric Kinny.