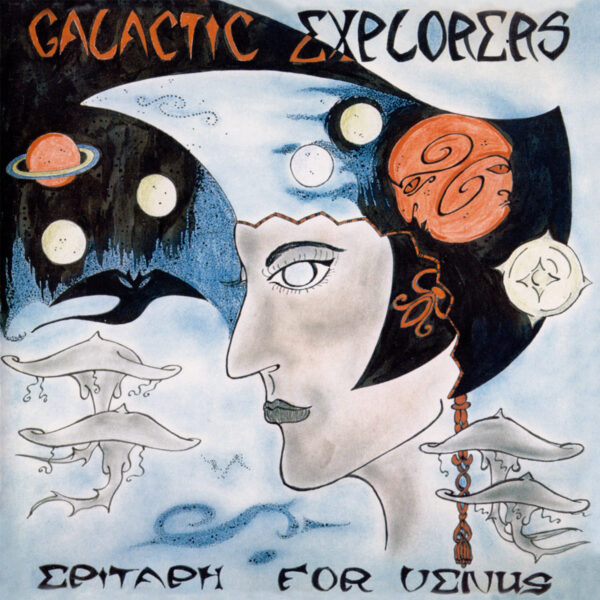 Another outing for the Galactic Explorers Epitaph For Venus (MENTAL EXPERIENCE MENT014CD) album, this Krautrock-manque gem from 1974 which was first reissued in 1996 on Gary Ramon’s Psi-Fi label. As the world knows, this was one of a number of records made under the auspices of English producer Toby Robinson using down-time in Dieter Dierks’ studio (and WDR studios) in Cologne, with Robinson showcasing local talents in the electronic and progressive rock genres and enlisting art students to design the covers. I’m not sure if the Pyramid label made more than six albums proper, but these private-press rarities are now highly regarded among collectors and connoisseurs.

The Spanish label Mental Experience have already dunked their tootsies in this particular pool with the compilation Cologne Curiosities (noted here), so it makes sense that they would snap up a chance to reissue the Galactic Explorers album, which musically and sonically is one of the more interesting and experimental of the bunch. The combined synths, keyboards, mini-moogs and Fender Rhodes piano of Johannes Lutz, Holst Seisert and Reinhard Karwatky produce a series of wispy, harmonious drifty sounds that are primo examples of everything we might expect of “kosmische” music, highly successful in evoking that cherished “lost in outer space” vibe. If we compare this album to the early works of Tangerine Dream, you might say there’s a tad less bombast and grandiosity in the noodlings of our three lesser-known Cologne contenders, and their outer-space explorations do seem genuinely fuelled by curiosity and a sense of wonder. Their small, modest sounds capture something about the cold stillness of deep space, and the sheer uncaring alienness of the inky-black wastes and starry-deserts that await the intrepid astronaut. Yet there’s also something benign and soothing in the music, perhaps because of the simple decision to stick with a basic root note for each meandering drone, and the use of basic arpeggios in the moog and organ soloing rather than “trippy” excessive workouts. Indeed our good friend John Bagnall, who happens to have reviewed this record for The Sound Projector when it came out, noted the “crystal clear simplicity and pure electronic sounds” as the hallmarks of this LP.

My favourite here is the side-long ‘Lunarscape’, a compelling journey whose patterns and repetitions may be what prompts the Mental Experience PR team to invoke the serial music of Terry Riley as a comparison point. But there’s a lot to be said for the slightly more threatening and decidedly more abstract tones of ‘Ethereal Jazz’, which uses subdued cymbal-crashes as its one concession to the “jazz” genre, to form a species of rhythm track, while the keyboard players indulge in mixed chords and strange shapes. ‘Venus Rising’ will satisfy the minimalist-lovers in the audience, and while this may not be in the same league as heavy-duty cosmic experimenters such as Cluster, it’s a splendid instance of studio craft and mastery of electronic synthesis in its handling of understated and subtle tonalities and textures. Undoubtedly there’s an audience today who are all ready for this sort of material, now more than ever. This reissue has been remastered from the original source tapes and exists in vinyl and CD form; the booklet (of which I do not have a copy) was written by Alan Freeman, a recognised authority on the history of this genre. From 1st August 2017.