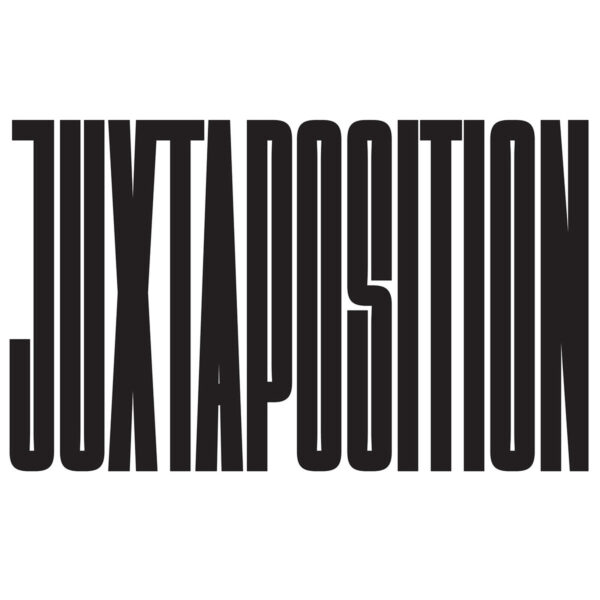 Juxtaposition (NAKAMA RECORDS NKM012CD) is a smashing piece of roary and noisy improvised music where the players involved are going all-out for a juicy, full-blooded experience as they set out on a wild boar hunt to trap the elusive pig of free music, much prized for his golden tusks and bristly hide. It’s another strong release on the Norwegian Nakama label, a musician’s label, the vision of bass player Christian Meaas Svendsen who has his own very clear ideas of what he considers worthy of publication. There’s a trio of players making a hairy racket with bass, electronics, tapes, mixing desk, and samples – plus the very wonderful vocalist Agnes Hvizdalek adding her amazing gurgles, shrieks, and wailsome utterances which bring every part of the anatomy into play – throat, diaphragm, lips, larynx, and belly. You may recall we heard this Austrian wildie on her 2017 album Index (also made for this label), where she stuck her head inside a factory chimney and allowed her intuition to do the rest, her voice billowing forth ruminations expressing her own interior landscape as only the most inspired creators can do.

Here on Juxtaposition though she’s in full attack mode, turning her interiority inside-out, leading the trio of hunters like a cross between Boadicea and Joan Of Arc, letting the full range of emotions sprawl forth through the action-painting stylings of her painterly shouts and splurgy yelps. Without doubt, famed Japanese shrieker Junko (who has often done it in small venues with Michel Henritzi) now has a pretender to her throne lurking in the flanks of the courtroom. Meanwhile the two Norwegian manly hunks o’talent pour forth angry metallic bursts and clanks, in a manner that verges on the obnoxious. These are Magnus Skavhaug Nergaard, who has also played his bass in Ich Bin Nintendo and Monkey Plot, here going “electric” with a vengeance and also letting rip with electronics and field recordings; and Utku Tavil, the drummer who sometimes performs as Beeatsz and whose Brain Pussyfication site is a marvellous active survey of the pulsebeat of underground Norway just now.

We mustn’t overlook Natali Abrahamsen Garner, the second vocalist who is showcased on the Propan album for Va Fongool (which looks majorly cool by the way, and I wish we had a copy of that for comparison), who is on good screechy form throughout, adding punky day-glo colours to the Jackson Pollock canvas of noise. When you remove all the modifiers from the printed credits, this is pretty much a drum and bass noise record with two madcap vocalists on top; what could be better than that? It’s an overpowering listen, but also energising…will give you as much of a sugar rush as the fruit salad that is photographed on the inner gaterfold, and is about as chaotic in structural terms as the fruit salad is in culinary terms…if that makes any sense. Great! From 25 September 2017, this one should be shouting “buy me” to all readers who know what’s good for them.