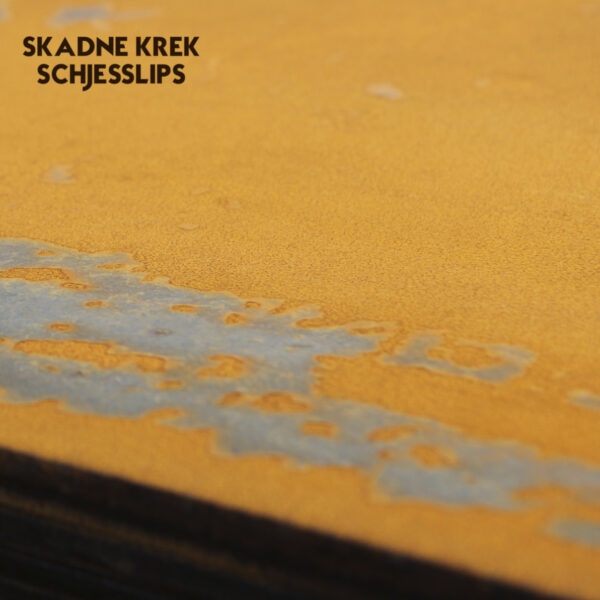 Schjesslips (SKUSSMAAL SKULP03) is a fine album of avant-rock noise and mayhem from Skadne Krek, effectively a Norwegian super-group of unkempt loopy rockist types…Gaute Granli (guitarist) and Bendik Andersson (drummer) play together as Freddy The Dyke, whose 2014 album for this label remains a pinnacle of high-energy nutsoid bashery, and we’ve also got a soft spot for Granli’s solo releases which are even more noisy and demented. The pair are joined by bassist Jens Borge and keyboard player Adrian Tvedten for five skonking cuts…the aggressive, punchy stuff is mostly on side A, particularly with the openers ‘Moabitt’ and ‘Taco Blood’ – if these don’t induce instant cardio-vascular revivification, then nothing short of a jump lead can help you…here the foursome play a species of disjoined, Nordic-styled “mathrock”, with the emphasis on tricky kick-drum beats and wild dynamics of stop-start noise bursts. People tend to underestimate the importance of a good drummer, but Bendik Andersson is driving the group as surely as a wild gorilla behind the wheel of a bulldozer. Tvedten adds some superb flourishes on his keys too – maybe some sort of string synthesiser – adding pleasing chord drones when he can, which act as a soothing balm to our wounds while Granli’s razor-sharp axe is hacking us to pieces.

On the B side, Skadne Krek branch out into more exploratory and experimental turf over two long tracks… ‘Savage Boner’ (a wilfully vulgar title) is the only track here to feature vocals, such as they are, since Gaute mostly just shouts and grunts and chants incomprehensibly, but few can ignore this clarion call as he rouses the troops to action as effectively as a heavy-set sergeant-major. The latter half of this tune develops into a freaky instrumental that’s almost psychedelic in its reach, and its very strong dynamic reminded me of ‘Paper Hats’ by This Heat (though one should be careful making such comparisons). ‘Gurn Perm’ is also lengthy, about as “noodly” as these angsty players get, producing the sort of repetitive music that’s bound to draw “Krautrock” labels from admiring listeners.

Don’t let the “restrained” cover – a photo by Jorgen Tjemsland – deceive you into mistaking this for some slab of experimental electronic drone, as it’s packed with powerful jolts which can galvanise your damaged tendons. I see their first LP came out in 2013 – don’t know how we missed that one – but it has more suitable cover art, a colourful drawing of a mad rabbit crashing upstairs in a building at top speed. From 8 May 2018.