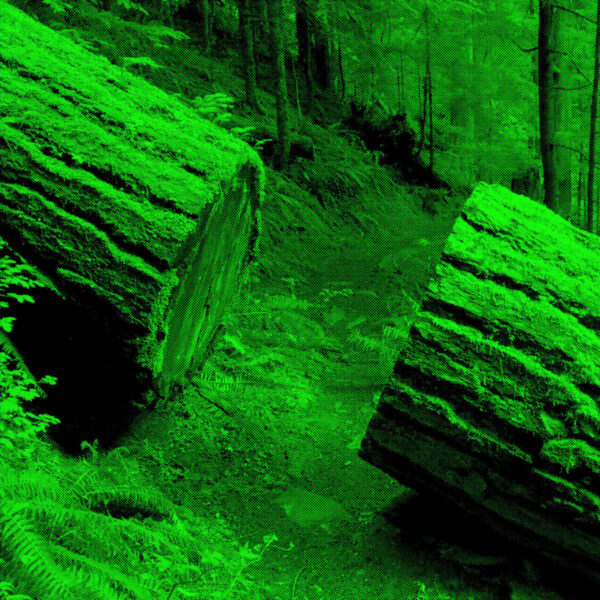 American performer Fritz Welch, now settled in Glasgow, continues to send us his far-out releases…the most recent of these might have been the 2016 LP Following Shapes To The Edge Of A Drift by FvRTvR, his duo act with Guido Henneböhl. Well, Fritz is here today with a green vinyl freak called A Desire To Push Forward Without Gaining Access To Anything (RADICAL DOCUMENTS RDLP08), a solo LP released in an edition of 300 copies by the Los Angeles label Radical Documents. It’s a fairly bonkers item…on it, Fritz turns his hand (and his larynx) to the sound-poetry thing, using his voice to generate screeds of wild, unformed vocalese, somewhat in the manner of Henri Chopin and his cronies, only much more untamed, unkempt, and fierce.

You might be prepared for this sort of thing if you’ve been following Fritz’s output, since there is at least one record by him featuring “horrible mangled voices” in the form of Crumbs On A Dumpster, a CDR put out by Chocolate Monk in 2013. Come to that, label owner of Chocolate Monk (Dylan Nyoukis) is no stranger to putting out records of incoherent vocal gibberish in the name of art, and delighting the ears of the few fortunates who receive these garbled messages of mouthy spew. Fritz offers us three distinct approaches to this art form on this LP. The first, ‘Square Teeth Non-Linear Conference Room’, is 14 mins of the raw deal – just him and his voice grunting and wailing, with mutant syllables that are primal and Neanderthal in nature, refusing at all times to form themselves into recognisable words. As such, it’s both a threatening experience and also quite liberating, freed from the burden of making sense and communicating on a much more profound, human level. Or not communicating at all; if the latter, it’s still packed with emotional juiciness, as Fritz Welch never fails to throw himself headlong into any given performance, evincing enthusiasm and commitment throughout.

‘Taimo’s Prison Song’ conversely does have words, and is a short poem written as an “answer record” to an obscure ditty by Tamio Shiraishi. In this recit, Welch makes an impassioned plea for the release of all prisoners in the USA, meticulously naming all the major centres of incarceration and making a meal of the word “penitentiary”. He acts out this short work with such grim finality that, for two amazing minutes, he’s moved into the method-acting thing and convinces us that he might even be an ex-con himself. The next step would be for him to open his shirt and expose his prison tats…but then Side A runs out. Flip to the B side if you want more of the same in a slightly more “artistic” context. Here the addition of live electronics by Andrew Barker (who also recorded the piece in Brooklyn) has given an extra lift to Welch’s impassioned bellowing on ‘The Donald Judd Vs. Elmer Fudd Inner Space Crisis’, although that pop-art title (worthy of Kenny Scharf or Ronnie Cutrone) undermines any suspicion that he might be getting “serious”. Again no recognisable words for the literary scholars among ye, but the ranting is far more extreme and the whoops, growls and shrieks reach further heights of lunacy, and are emphasised by the occasional use of electronic echo and abstract noise from Barker’s mitts.

We’re not too far away from the work of François Dufrêne perhaps, but there’s no critical-political dimension and Welch is far less refined – in a good way. He gets straight to the point and sticks to it, even if it’s not clear what the point may be, and a healthy dose of absurdity informs his actions on these spirited performances. The sickening lurid green cover designed by Reuben Lorch-Miller pretty much seals the deal on this one. From 27th September 2018.