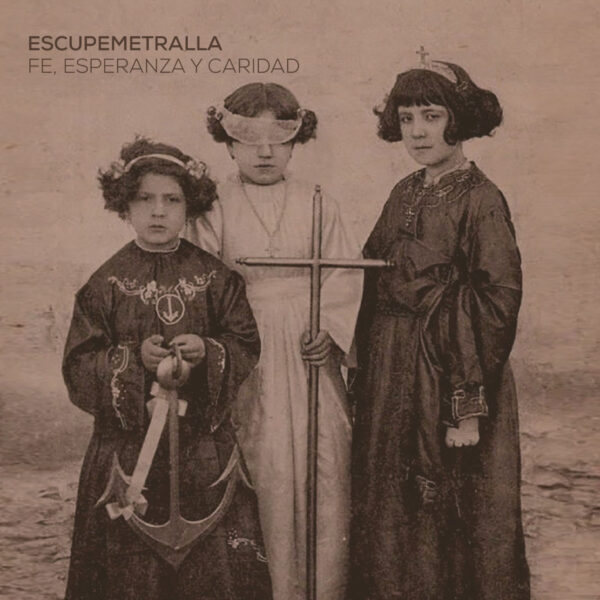 Last heard from Barcelona duo Escupemetralla with their 2017 album Poison Of Dead Sun In Your Brain Slowly Fading, an uneven but encouraging effort with many “industrial music” influences worn on the sleeve, and a certain amount of political bite and bile in the Anti-American themes they saw fit to entertain. They’re here today with Fe. Ezperanza y Caridad (NØVAK NVK061), which is the Spanish way of invoking the New Testament creed of Faith, Hope and Charity, and the subtext is taken up with a nice vintage cover photo showing good Spanish Catholic women wearing symbolic / liturgical dress.

Not that the record is pro-religion – quite the opposite, if the press release is anything to go by, which starts out with a fiction about researching “the brotherhood of the Christ of Forgiveness” through interviewing illustrious Castillian people, and stating Escupemetralla’s intention to publish a series of “modern retorted symphonic operas”, but ends up dismissing religion as “fanatism, superstition and ignorance”. Inside, the humour and veiled irony continues as each track is annotated in a semi-humourous manner with unlikely anecdotes, misinformation, and sardonic barbs. These little three-line potted histories are bound to raise a smirk or two amongst most listeners. The music’s pretty good too. The team of Muhammad and Muhammad are still emulating beat-driven industrial music – Ministry and Trent Reznor are likely to be the strongest reference points – but it feels like they’re updating the approach for today’s audience, resulting in a much slicker and exciting package of dark, hard-hitting material with plenty of negative energy and strategically-placed punches. The only competitors who come close to what they’re doing are those artistes who appear on the Kvitnu label.

I seem to recall Poison of Dead Sun had a few moments where the duo languished in murky explorations of sound that led nowhere, but that issue seems to have been addressed in V 2.0 here. Not an inch of wasted fat or dead wood in these breathless grooves, and they still reserve the right to cast a jaded eye on the exigencies of the modern world – not just in the sarcastic titles and subtexts, but the music itself, which is informed by anger, disenchantment, boredom and restlessness, emerging on the other side of these emotions to express their discontent in a concentrated and energised form. “We have faith and hope this one can be enjoyable, overwhelming or/and confusing”, state the creators in a nice hand-written note to me, cleverly weaving the title of the record into their message.

Enjoyable, certainly; not quite overwhelming, but certainly energetic and powerful in places; I have to deduct points on the “confusing” theme, as they don’t quite deliver enough ambiguity for me this time, and once you’ve cracked the code of their witty post-ironic contextualising, it’s pretty clear what they’re up to, malarkey-wise. Nonetheless, a nice one. Arrived 18th February 2019.