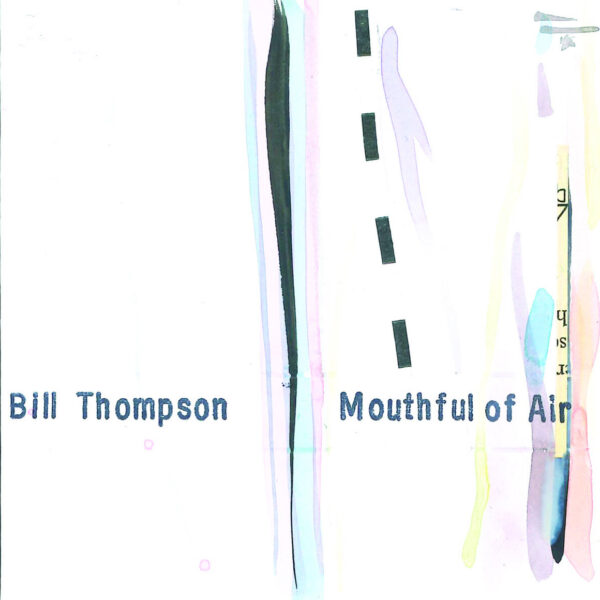 Bill Thompson it was who created the epic two-CD drone set Mouthful of Silence, which was sent here in September last year. A hymn to the virtues of solitude and silence, it was created by Thompson using the Moog guitar, an instrument that has enabled him to advance his own unique approach to table-top guitar drone. Now he’s put out Mouthful of Air (BURNING HARPSICHORD RECORDS BHR 002) on cassette, a follow-up work which contains alternative mixes of the earlier record. This one has the feel of a collaborative set – the idea for doing it came from Ian Stonehouse, the visual artist who also makes sound art, and Stonehouse not only contributed the cover art to this release, he worked with Thompson on the ‘Blank Sky’ piece, a bonus track which you can only get through download when you but the tape.

Serene and very pure drone music on offer here, music which I still maintain is endowed with a spiritual quality and which thus exudes calming forces, suitable for settling the turbulent mind and allowing concentration of the higher realms. Thompson manages to remove any extraneous or unnecessary elements that might impede this goal. It’s much to his credit that he seems to do it in a very intuitive manner, through performance and concentration, rather than through composition. You can tell right away this is not empty process art, nor schematic over-conceptualised grids and dots, rather it’s genuine hand-crafted music being produced in real time. Long may his vibrations resonate across the globe. As to the Stonehouse remix piece – not yet downloaded at time of writing – this was executed by combining Thompson’s music with “improvised modular electronics” produced by himself.

I might want to add a brief thot about the titles here, ‘After Stillness’ and ‘After Solitude’ – in name, they directly reflect the titles of the two CDs from which they are derived. Mouthful of Silence took us to an extreme point of serenity and calm beyond which I though we couldn’t go any further. Well, here is what we find beyond that point. From 4th March 2019.