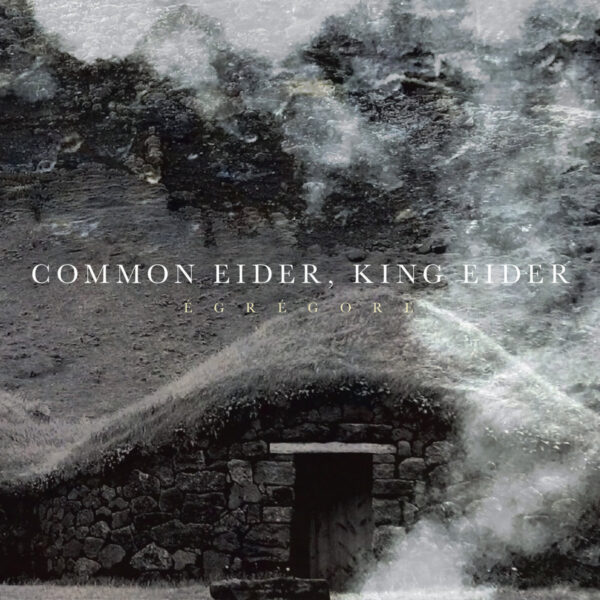 On Égrégore (COLD SPRING RECORDS CSR271CD), we have a very convincing set of acoustic murmuring drone dredged up from the occluded zones…those mumbling and rattling their way through four lengthy suites are B.S.s with Arexis, pretty much a team-up of Common Eider, King Eider with La Breiche, although those involved have a list of other darkened activities of which they boast, including Coume Ouarnede, Stille Volk and Ihan. Plus there’s a Badgerlore, Deerhoof and Six Organs Of Admittance connection…some day all musicians will be this multi-faceted, spreading their talents evenly among a plethora of side projects and sideways swipes.

Common Eider, King Eider from San Francisco have lopped our branches recently with Shrines for the Unwanted, Respite for the Cast Aside, something of a lodestar or mile-bench in terms of solemn, faceless ceremonial chantery and groanage, while La Breiche from France caused permanent wrinkles in the noggins of most sensible folk in Bordeaux with their Le Mal Des Ardents album from around 2017, what with their weird interest in ancient instruments and archaic postures, and their general assumption that the entire world is still living through the Black Death. 1 Where these two overlap, for those of you who like to think in terms of Venn diagrams, is a shared interest in all things “pagan”; the French half of the act probably because they want to hark back to any pre-Christian era so as to undermine European’s sense of its own civilisation, the American half of the act because they just like rubbing antlers and bones together.

One does get a bit weary of all these “antler” records, to say nothing of the large numbers of nudniks who profess an interest in “ceremony” without much of a clear idea of what ceremony means or what gods they’re attempting to invoke, but I’m making an exception for this item, since there’s something so assured about the performances and the way they gently scrape away the layers of our collective physical husk, in order to reveal the spirits with which we’ve lost contact. You can almost smell the burning offerings as you spin this dreary set of lengthy, rumblesome anthems. The artwork is from a member of Sutekh Hexen, another SF combo specialising in Black Metal and industrial noise. Arrived 29th July 2019.