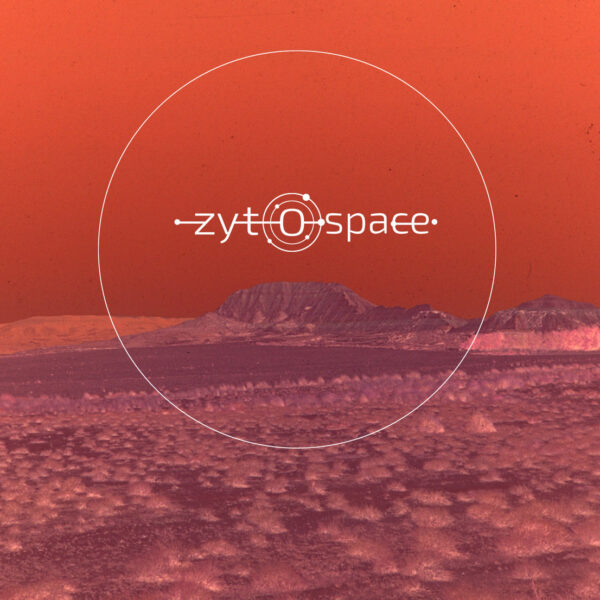 Recently, we waxed lyrical about the Orféon Gagarin record, made by Miguel A. Ruíz in 1986 and released as a cassette originally, then reissued on vinyl in 2019 by the Spanish label Verlag System. I found it to be an exceptional piece of work with elements of industrial noise and krautrock influences, but mostly I enjoyed Miguel’s very rugged and offbeat approach to music making. He seemed to be quite an eightball, even in a field (the underground cassette scene of the 1980s, that is ) where pretzels and salted nuts were fairly plentiful on the ground.

Well, Ruíz is here today as one half of Zytospace, performing with Tomas F. Giron, and the album is called Wüste Land (VERLAG SYSTEM VS023). For your simoleons, you get two very long tracks in a trifold digipack, with artworks suggestive of an alien landscape. Have to say upfront this isn’t anything as radical as that 1986 item, but I guess there’s no way we could expect that; instead it’s pretty much a tasteful keyboard album, with the duo’s equipment lovingly listed in detail on the credit bylines, a place where Korg and Kawais abound like digital mice. And there’s a photo of them at work surrounded by equipment that is bound to bring burning tears of envy and induce slavering drool among all readers of Synth Zone and Keyboard magazine.

For this outing, the krautrock-kosmische mode has been the abiding inspiration, and at first swing through the croquet hoop Wüste Land strikes me as a souped-up 2018 take on a Klaus Schulze LP; it’s got the same discursive style (they go on unceasingly), every space filled with lush synthetic sounds, and even some of the keyboard settings are not far apart from what you’d hear on one of Klaus’s 1978 or 1980 LPs. Despite the outer-space themes and yearnings they draw about them like so many glitzy gladrags, Zytospace don’t have the cold chill of Tangerine Dream nor the skill for probing those mysterious unknown galaxies using their sequencers and workstations. Even so, they make the long durations work in their favour. Track 1, ‘Das Totenamt / Sermon Des Feuers’ evolves its way through some ingenious shifts and changes that make it eligible for inclusion in the alternative-soundtracks for The Andromeda Strain stakes…we do get some murmuring voices of paranoid scientists appearing briefly on the track, and that’s a detail I wish they’d enhanced a little more. Despite this, I’m still feeling vaguely unsatisfied by the soft-centred music and its occasional lapses into Jean Michel Jarre-isms.

The second set, ‘Chroniken Des Lichts / Was Der Donner Sagte’ 1, exhibits more of the same tics – but it’s evident the players have a good deal of control over their respective kit, enabling them to exercise restraint where it’s needed, resulting in a certain fascinating minimal monotony in the sounds and the harmonic range. Have the feeling this record is going to grow on me over time…from August 2019. Co-released by Music2Dream and Ediciones Toracic.