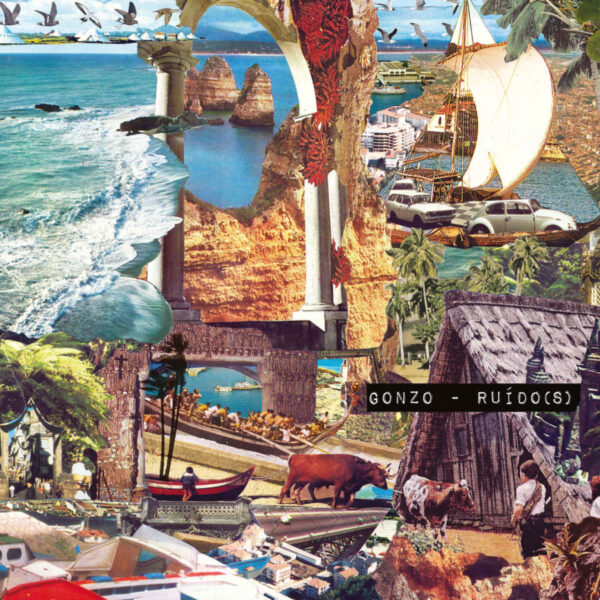 We heard Gonzo (Gonçalo F. Cardoso) in 2015 with his cassette tape Ruídos (À Portuguesa), which was but one of many releases in his seven-year career performing under this alias, along the way releasing such titles as Dabke Noise(s), Ark Eulogy, and Samboia Kanguick. I mention this because with this new title Ruído(s) it seems Cardoso is closing down the Gonzo alias (unless this is all another piece of misinformation) and maybe even retiring from music.

That 2015 tape utilised his unique audio collage method, and today’s offering continues that technique. Field recordings, old records, and soothing beats are all part of the general source material, everything suspended in a warm bowl of ambient oatmeal. As before, I enjoy the way that Gonzo puts things together in a porous, free-associative manner, which is highly evocative…he doesn’t so much tell stories as hints at them in an elliptical or oblique manner. Sometimes they might not even be stories, so much as memories of them, memories borrowed from other minds; at his best one has the idea that Gonzno might well be capable of reading the minds of men from the past, and yet he modestly declines to make much capital from the situation. If he was a film-maker, we’d end up with a double-exposed or even triple-exposed showreel, where it’s impossible to disentangle the layers; found footage seeping into the grain of forged photographs and ethnographic swipes from the archive of National Geographic magazine.

On this particular record, Gonzo may even be sampling his own back catalogue to some degree, or reworking elements from previous releases into the mixages, as he prepares to take this final bow. At the same time he insists that the work is both serious and humourous, as he mines his library of amazing field recordings from around the globe and comes up with playful juxtapositions to raise a knowing smirk among collectors who have the entire Ocora catalogue at their disposal. As with the cassette, the Portuguese music theme is also strong, and though I know nothing about the country and have never visited it, I’m prepared to believe this is a very convincing and sympathetic sound portrait of that place, expressed in mosaic / collage form. Balmy, odd, enjoyable; from 21st August 2019.