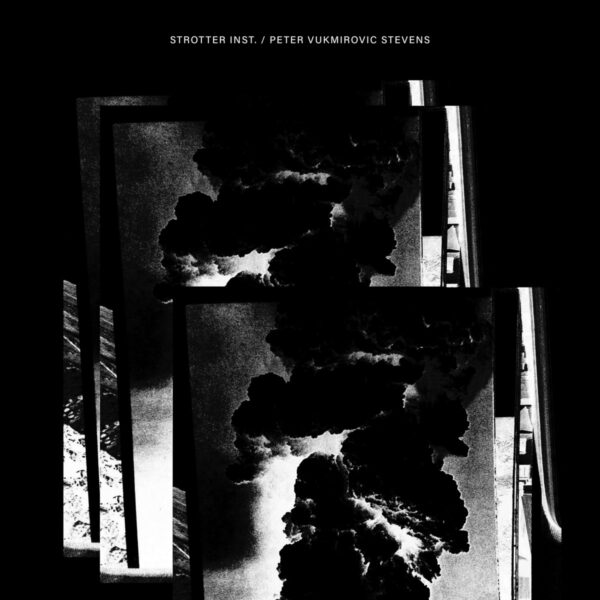 Quite taken with Bile Noire (ARPAVIVA AVLP 001), which is a vinyl item housed in a moody black cover on a new label Arpaviva which cites business locations in Los Angeles and Paris. It’s a team-up between Strotter Inst. and Peter Vukmirovic Stevens – Strotter Inst. is Christoph Hess, the Swiss turntablist who can’t put a tonearm wrong as far as we’re concerned and like most sensible folk we worship the very belt-drive of his kit. We last heard him on Miszellen, a double LP of fairly staggering proportions for the Hallowground label which showed him teaming up with notables and big names from the world of art music and underground noise.

Today’s record could be read more as a showcase for the piano of Peter Vukmirovic Stevens, and Strotter Inst. exhibits grace and restraint with his subdued, minimal contributions to the work – almost relegating himself to a background, time-keeping role – but his distinctive imaginative moves still win through. Stevens appears to have achieved a certain worldwide renown already with his compositions for orchestras and orchestral music, has picked up a few prizes for his mantelpiece, and still finds time to make colourful abstract and pictorial art. But his piano work here really stirs the fireplace and stokes the mental boilers, mainly by his use of lower-register notes to evoke dark and brooding emotions. Already I feel like we’re in a dank 19th century salon in some non-existent European country where, due to timewarps and inter-dimensional distortions, the course of history has been drastically altered and everyone lives under the yoke of multiple right-wing regimes, yet people still find time to act the part of the decadent dandy type replete in velvet cape and top hat. Matter of fact such a figure has left his gloves and cane on the piano lid and set down to deliver himself of these six exercises in grimitude and ghastlery.

To bolster the oppressive mood, every track title is like an essay or the chapter heading from a book that combines the worst excesses of an absinthe-soaked poet preoccupied with death and sin with a treatise on the human condition, written by a philosopher who evidently regarded Friedrich Wilhelm Nietzsche as a bit of a cissy. As Stevens indulges these florid, over-wrought minor-key melodies on the old Bechstein, Strotter Inst. uses his prepared turntables to act as a Greek chorus tutting and sighing their sounds of approval, like metronomes that wish they could run away and join the circus. To complete the package, there’s the Sean Waple cover artwork which uses ingenious slicing and partitioning of treated photos to disrupt the eye, and distract us from the main horrifying image – that of a huge cloud of black smoke, which could be a gigantic explosion or a thunderstorm in full spate. Either way you can tell this is not going to turn out well, and the image quickly becomes an index of the troubles of the modern world, starting with climate change and ending with nuclear destruction.

It’s really great to get this strongly European take on these themes, as this LP does admirably, in an arena which has been dominated for too long by the American noise-brooders like Nate Young or others from the Wolf Eyes school. For reasons personal to myself, I have the impression Peter Vukmirovic Stevens would work well with the surrealist Raymond Dijkstra; if they made a record together, the entire fabric of civilisation would probably rot away in a matter of minutes. From 27th August 2019.