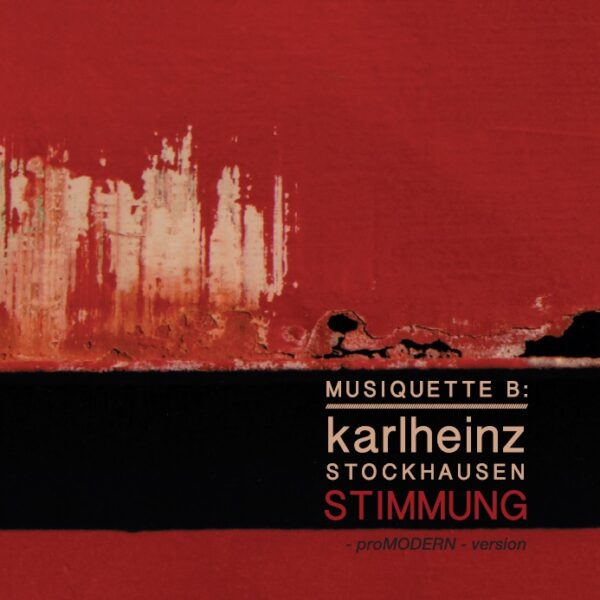 Here’s a new recording of Stimmung (BOLT RECORDS BR 1057), the famed Stockhausen piece, performed by the Polish vocal group proMODERN. I’ve often regarded Stimmung as one of Stockhausen’s “greatest hits”, and in my limited experience of talking about his music with others, have found this to be the one that everyone seems to like – even if they’re not sure about the rest of his canon. It might even be one of those pieces of music that persuades non-believers into the fold of classical avant-garde, the same way that Miles’ Kind Of Blue is the one jazz record that’s even owned by many people who say they don’t “really” like jazz.

Why does Stimmung have this aura of “popularity”? Probably because of its simplicity – effectively just a single chord with variations sung for the best part of an hour – and maybe the somewhat erotic lyrical content doesn’t hurt, either. In attempting to account for the music, the press notes (written by Jacek Hawryluk of Polish Radio) start to gush slightly about the 1960s, the hippy movement, and the Summer of Love, but does at least remind us of the universal appeal of the human voice, which is another factor that makes Stimmung one of the severe German’s least alienating works. There’s also the spiritual / meditational aspect – it might not be too fanciful to think of this as a form of modernist prayer – and for those who like decoding puzzles, the heavily-annotated structure of the work is a labyrinth for the mind, following a logic that allows the inclusion of many aspects and genres of musical history.

As to Poland’s part in the cultural growth of Stimmung, it seems to have been performed in that country but two times – in 1974 and 2008. proMODERN might be the first ever Polish vocal group to attempt to tackle it, and I think this radio recording of it is only their third ever performance since they started doing it in 2017. I wish it were more exciting than it is. They’re hitting the right notes, but throughout I’m struck by a certain hesitancy in the performance, as if they’re not quite sure what any of it means; they certainly don’t seem remotely animated or emotionally engaged with the content. I felt the same hurdles with the Geba Vocal Ensemble and their take on Encumbrance, from April 2019. The elaborate structural dynamic planned by Stockhausen seems to mean very little to proMODERN, and they perform everything with the same over-reverential, cautious, paint-by-numbers intonation, thus flattening it out and yielding zero dramatic tension. In its favour, the slow pace and the slightly solemn vibe of this record could be taken as a positive if you subscribe to the “meditational” school of thought around Stimmung. From 4th November 2019.