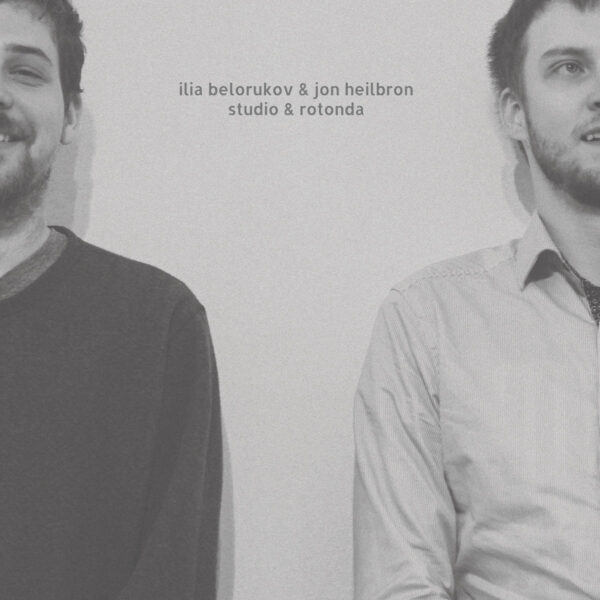 New double CD from the pairing of Ilia Belorukov with Jon Heilbron, called studio & rotonda (INTONEMA int031). Jon Heilbron is the Australian fellow who came our way in Feb 2019 with his Pieces For Chord Organs, on this same label. He’s known for working with Bontempi chord organs, devices whose capacity for musical variation and subtlety might be a bit limited (seeing as they were built as toy organs), but evidently Helibron relishes the challenge and has made this his own thing. In particular, he makes a virtue out of the noise of the electric fan of the Bontempi, that part of the instrument that blows over the reeds.

On the “studio” disk, he’s doing it at the Cement Factory Studio in St Petersburg, adding toy harmonica and tuning fork to the list of possible droning instruments, and producing his characteristic “baffling” long-form works. By that I mean he loves these unexpected gaps and pauses that are hard to explain; this might not make him an outright minimalist type, but it does make the music that bit harder to follow. The listener has to be paying attention and follow the uneven pathway. On these four untitled works, Ilia Belorukov – his actions barely audible to my insensate ears – is contributing alto sax, snare drum, and various objects. I would like to say these are pieces full of air and light. They certainly contain a lot of silence, and for the most part it’s like being inside a room with bare walls. The last (7:10) piece stands out for its dramatic approach and more forthcoming, maximalist attitude; in company of the other pieces, it’s almost a discordant, roaring noise.

On the second disc ‘rotonda’, it’s pretty much the same set-up and recorded within days of the studio sets, only now it’s live at the Mayakovsky Library in St Petersburg. While still pretty low-key and slow-changing, it’s evidently a lot more interactive and collaborative and we can enjoy the sensations of two players pulling in different directions and rubbing their contrasting textures. The air of inscrutability hangs heavy in the dome on this day, with more of these pregnant pauses and long, tense silences. I think this may mean we have to admit that the strains of “Onkyo” and “EAI”, now about 20 years old, are developing and mutating in many interesting ways across the globe, depending on which hands are doing the playing and who is communing with who. From 7th November 2019.