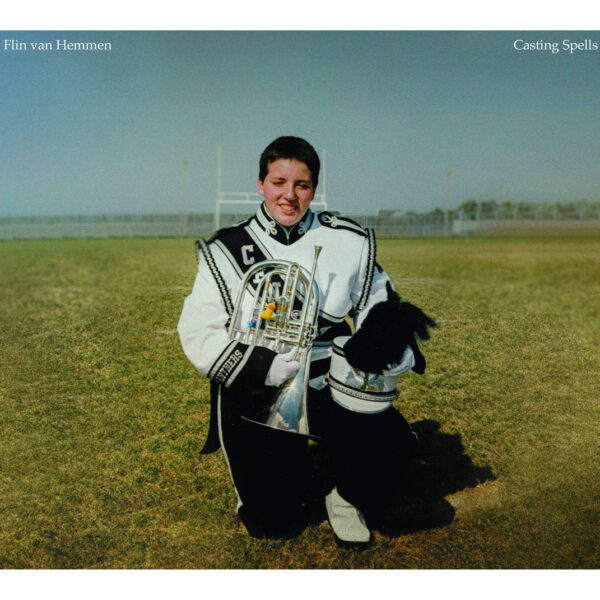 Flin van Hemmen impressed us with his 2016 solo record Drums Of Days and also appeared on the hour-long improvisation record by While We Still Have Bodies from 2017, both released on the Brooklyn label Neither / Nor Records by Carlo Costa. Dutch player Flin has made a home for himself in the USA and is joined on today’s excellent double CD Casting Spells & The Cove (NEITHER/NOR RECORDS n/n 012) by his two sidemen from last time, the Norwegian bassist Eivind Opsvik and the American guitar player Todd Neufeld. Flin himself, percussionist by trade, plays the piano and Farfisa organ along with restrained percussive instruments.

This record certainly showcases his compositional and production skills…two sets of fascinating and mysterious instrumental tunes, evidently realised through a lengthy contemplative and deliberative process, and arranged to create two perfectly-formed suites, book-length essays in sound, or rather more like a book of surrealist poems leading us ever further into a strange and shifting universe of intrigue. It’s worth restating that the production is a large part of this…at one level we have a conventional “jazz trio” set up at work, creating stark and simple skeletal tunes with piano bass and drums, but we also have post-recording processing, added field recordings, overdubs, effects…even a poetry recit on one track. At times, parts of the Casting Spells set might be mistaken for a very restrained “ambient” album, save that it’s produced much more honestly and organically than by over-worked digital methods. Van Hemmen’s interventions are incredibly nuanced, disciplined; he never over-indulges himself with these effects, and they are used simply to advance the ideas behind each dream-like fugue. In spirit, he carries on the work from Drums Of Days, and with much the same result; as noted last time, “I felt my very contours turning fuzzy and indistinct, and now I’m so faded and transparent you can’t make me out from the wallpaper.”

In his accompanying text, Flin van Hemmen describes a labour-intensive process that gave birth to these two discs, and apparently he passed about three years simply listening to one single recording that was made in a day, finding new possibilities within that one performance; he did it by making loops and samples, manipulating the sounds, but above all by listening. Both Casting Spells and The Coves are in fact the result of editing and selection, and the judicious arrangement of several parts in what appears to be a mosaic-like method. In doing this, wonders to himself whether he’s being true to the strict “live” ethos that some improvisers live by, and also wonders whether it matters that he hasn’t. He likens the process to painting. He likes the way that “certain surrealists touch on something more profound than those clinging to the natural”. He also believes that a great work of art has an invisible dynamic, “its dynamics are not heard”, and that it “offers … a space in which we can investigate, and embark on an inward journey”. To embark on such a journey, start here. From 1st November 2019.