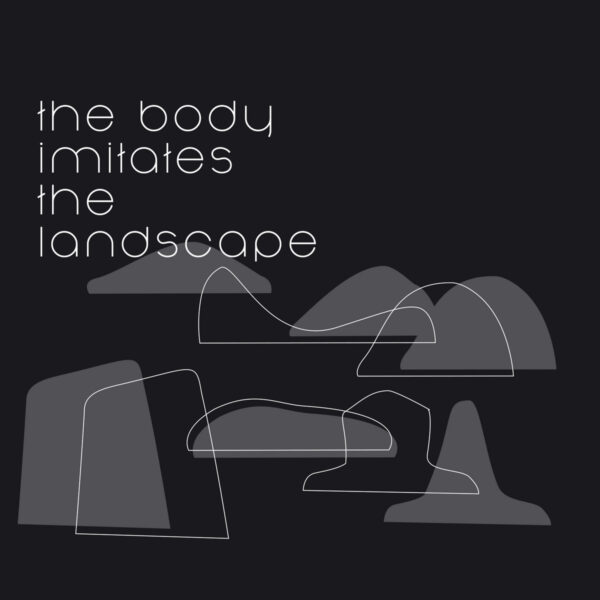 The Body Imitates The Landscape (UNSOUNDS 64UD) is the latest work by Argentinian composer Claudio F. Baroni, who made Motum for the Unsounds label in 2018. This new work is quite conceptual, very collaborative, and includes the work of the highly-regarded Maze Ensemble, including talented players Anne La Berge, Gareth Davis and Reinier van Houdt; we’ve heard the Mazers on their fine transparent LP Raw from 2018.

Today’s record may appear at first glance to be one of those “journey through the body” records, a theme which sometimes appeals to musicians; not just the awful Roger Waters and his Music From The Body, but also the very obscure Musica Endoscopica by Teresa Rampazzi from 1972. Baroni’s track titles refer explicitly to specific parts of the human anatomy, and we move from the head to the legs and feet by way of the back and the belly. However, it’s a bit more complex than this; the structure is in fact based, not on his own ideas, but an art installation piece by the visual artist Adi Hollander, who in turn derived it from her reading of an essay by Michitaro Tada. She created the installation The Body Imitates The Landscape, mainly to address the issue of sound as vibration; we don’t pay enough attention to the way that sound vibrates, and Hollander’s response was to set out waterbeds with speakers inside them, inviting the viewer to lie down and experience pre-recorded sound vibrations. I never saw this installation, but I can imagine it being quite effective, given that most people say that water is a very efficient conductor of sound waves.

Hollander and Baroni collaborated to produce this live version of the installation with the added music played by Maze Ensemble. The general idea seems interesting enough, even though it’s trying to make a lot of capital out of describing a rather commonplace observation; but Baroni’s musical additions do very little for me. Despite the fact that eleven separate body parts are invoked, the music simply sounds like the same solemn piece played eleven times over, with no effort made to differentiate these distinct parts of the anatomy, nor to present meaningful variations in the musical information. The whispered voices on each piece are perhaps intended to add layers of meaning, but I find them distracting and pretentious. I’m feeling the same lack of engagement and distance that I felt with this composer’s Motum, and I don’t feel he has earned the right to compare this uninspired spoken-word-and-music with the works of the great Robert Ashley, to whom he dedicates the work. From 23 December 2019.