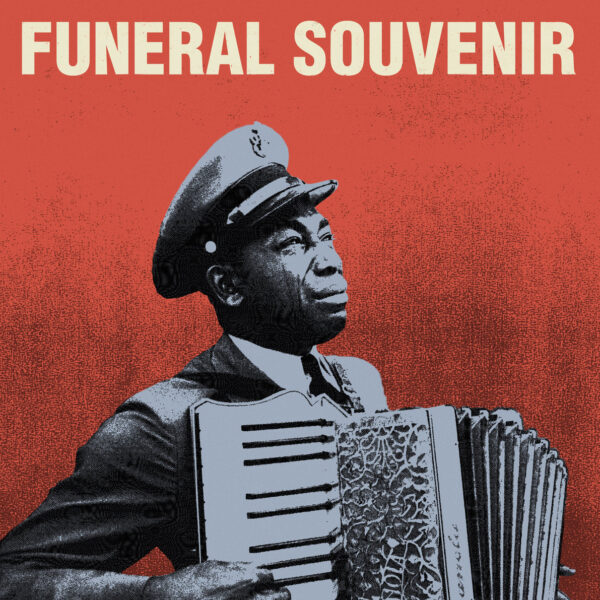 In 2019, we received and heard and very much enjoyed the unique Orféon Gagarin album, originally made by Miguel A. Ruíz in 1986 and released as a cassette on his Toracic Tapes label. The Spanish label Verlag System did that handsome reissue, and here they are again with La Noche Del Anhídrido (VERLAG SYSTEM VS019) by Funeral Souvenir. Yes, another cassette, also a solo set by Ruíz under an alias, also on Toracic Tapes and from 1987. Another slice of history and evidence of what was presumably a fascinating and exciting hive of activity in Spain during the 1980s, of which Esplendor Geometrico must presumably be reckoned as central beacons or pillars of radioactive salt.

As ever, I am neither expert nor enthusiast when it comes to the “industrial” genre and its many mutations, but I like this record just fine. Miguel A. Ruíz made it using synth keyboards such as the Casio SK1 and the Yamaha DX7, both of which are (I think) highly regarded or desirable amongst people who know about such things, plus there’s the Cheetha SpecDrum which is presumably the drumbox providing his remorseless rhythms, and the trusty short-wave radio for grabbing useful samples of voice and other detritus to be ripped out of context. The other ingredient is reverb, an effect in which this particular album seems to be drenched to the nines – not a pulse, throb or drone goes by that isn’t propelled by that juicy “scrunch” that means so much to all those bedroom fans, and I do find much to savour in the raw and primitive way it’s deployed here. Records made at EMS in Stockholm also seem to love reverb as part of the house sound, except they use it much more smoothly, so I guess they have a more expensive and refined way of producing that effect. The reverb in this case may have been produced by Ibanez digital delay going through a ZX Spectrum computer; it does seem that fans of this genre of music find as much enjoyment in identifying the toys in the box as they do in the music.

For the previous record, I enjoyed the “raw DIY minimalist spirit” that informed every move, and that essence is still writhing and twitching on this release, but the Funeral Souvenir mode is somewhat more maximal; I mean there is plenty of incident, lots of layers, and things like loops, samples and drones producing a nicely fugged-up experience; it’s not distortion, I must stress, but something approaching the state of a swamp, a muddy bath, as if Miguel A. Ruíz perceived the whole of society as a sink of despond in which only a few were brave enough to submerge and fathom the unknown depths. Furthering the nightmarish feel is the buried voice samples, used so very sparingly and entirely free from the clichés that are so often associated with that device. We have here testimonials from Siegmar Fricke and Joseph Maria Soler Sola. Fricke, active since 1981 and another innovator in the industrial field, received the cassette when it came out, and praises the radical nature of La Noche Del Anhídrido, finding much pleasure in the “apocalyptic information-overdose of radio voices”. Sola (who is also Stahlfabrik) likes what he calls its “icy metallic effects” and claims it sounds as fresh today as it did 32 years ago; “great sound artists…know how to make their work endure beyond time, space and dimensions” is his grandiose way of putting it, but the point is well made.

If you buy this LP, you get the original tape in full (it was only six tracks) plus two bonus tracks, recorded in 1988, rescued from rather obscure cassette compilations – although these also appeared on Miguel’s CDR reissue of the album in 2009, with different titles. There are two other tunes on my CD copy, which I think are only available on the digital release; one of them is a reworking of the opening cut from La Noche Del Anhídrido, and the other is a nice paranoid pulsing beast called ‘Episcopalizer VI’. In all, a record of a somewhat grimmer caste and darker hue than the imaginative Orféon Gagarin, but still highly recommended. From 12th March 2020.