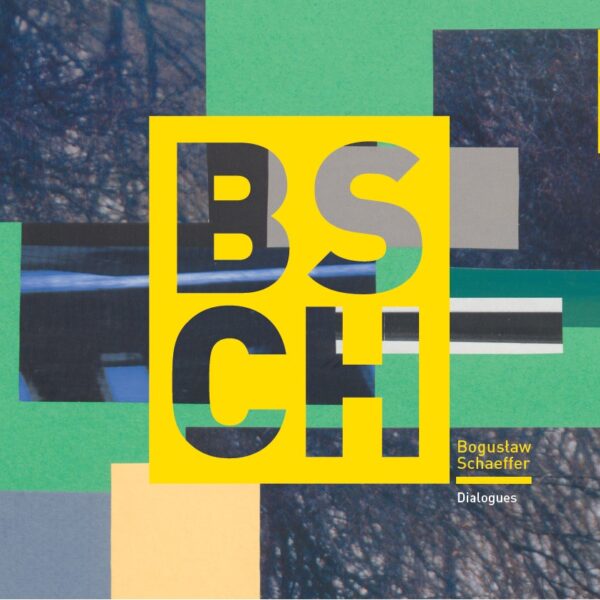 Here are five works for piano by the Polish composer Boguslaw Schaeffer. We heard him some years ago on the double-CD set Assemblage, but that was to showcase some of his works for electronics and tapes with instruments; for piano lovers, check in here for Dialogues (BOLT RECORDS BR 1063). I think it’s fair to say Schaeffer is still little-known as a figure in 20th-century composition, despite being a member of the Krakow Group in his home country (the most famous member was Penderecki). But it’s the aim of the Bolt Records imprint and its editorial team to redress this balance. As Andre Bauge wrote in 2014, “the effort taken by Boleslaw Blaszczyk, Michal Libera and Michal Mendyk to publish these composers from lesser-known research studios results in complexifying the historical understanding we have of this music.”

The works here are played by Andrzej Karalow and Maciej Piszek and were recorded in 2019 at Polish Radio. ‘Dialogues Pour Deux Pianos’ was written in 1996; and right away this listener is daunted by the complexity on display. Just 23:30 in duration, but the amount of musical information is considerable. No wonder; it’s been composed in mosaic-fashion, created from 354 fragments of music, filling 50 pages of the published score. One does have to admire the diligence and craft required to produce material of such density (and the laborious effort does show in the finished piece), let alone the skills required to play it. Despite its micro-approach, the piece emerges as a coherent and holistic statement, but that isn’t to say it’s especially easy to follow; the multiple post-modern dissonances, doubtless all pre-planned to a tolerance of 2 microns, don’t make for a comforting listen.

For ‘Uneinigkeiten fur zwei Klaviere’, written in 1988, we have two pianos in microtonal tunings. I’m dimly aware of reading about the whole microtonal thing, mainly in the context of La Monte Young and just intonation; I’ve tended to understand it as an oppositional action of some sort, a challenge to the convention of the well-tempered klavier which, adherents of microtonality would claim, has dominated and corrupted mainstream music for too long. I have no idea where Boguslaw Schaeffer stood on the issue, or if he even perceived it as one. Strangely, he himself destroyed large chunks of information relating to this ‘Uneinigkeiten’, including several parts of the score and, more importantly, the instructions for how to tune the pianos. Some material has been discovered / rescued since, however, allowing this recording to take place. Approx 11 minutes of music arrives in short episodes, some less than a minute in length; some of the harmonies here are (deliberately) astringent and near-painful, and the whole is very hard to digest. Feel free to savour the many pages of tuning instructions in the booklet here, with rows of data about the very precise Hz frequencies that are required for ‘Uneinigkeiten’; maybe you can try it at home. For me, this is one glimpse under the bonnet too many.

So far the trend that’s emerging for me is that Schaeffer is concerned only with form, and has no interest in sublimation. The notes here (by Konrad Jelinski) allude to the composer’s personal “anti-credo”, which I believe we have encountered before on the CD Travel Notes from 2018; “music does not communicate any content,” is the strength of his belief, and all we can find to say about it is a description of the method used for its construction and realisation.

‘aSa for Clavichord Solo’ is from 1973, a solo work played by Maciej Piszek, and stands out in this company as the composer included a lot of very direct prose instructions for how to play each of the ten sections; it gets very physical, almost like an attack on the clavichord. A microphone is involved, and though the sections are quite short, they carry a lot of complex structure, mixing conventional notation with graphic notation. The aim, according to the essayist, is “to maximise expressive abilities”. With its fierce, staccato approach, ‘aSa’ is quite alarming.

Back to 1966 with ‘4H / 1P’, a title which unpacks into “four hands, one piano”. This exhibits a slightly less austere side of the composer’s nature, and includes a lot more by way of diverting effects. Besides the extremes which are baked into the piece (extreme dynamics, volume, and tempo) producing musical leaps of logic which should give you quite a jolt, there’s a catalogue of non-normal piano playing techniques, including inside-piano (string plucking), liberal use of the forearm leaning on the black keys, and a certain amount of freedom granted to the performers; elements of improvisation are allowed, and they can choose in what order to play the sections. All signs are of equal value, and none of the elements or sections are in the background; everything is upfront all the time, with the insistence of a Merzbow noise piece. It’s more up-tempo than what we’ve heard so far, but still feels emotionally blocked, in spite of all this strenuous yearning towards freedom.

Also here: the 1951 ‘Concerto For Two Pianos”, a piece which dates back to the composer’s student days when he studied under Artur Malawski. In all, a rather troubling and dissonant set of works, and on balance more of a formal exercise in composition than anything else, but the complexity and depth of the compositions should give you plenty of material to work on and digest. From 23rd March 2020.