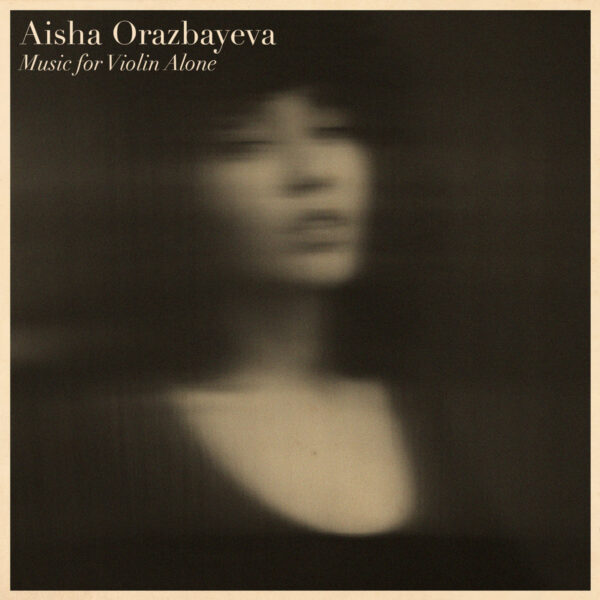 Truly excellent collection of violin music by Aisha Orazbayeva on her album Music For Violin Alone (SN VARIATIONS SNA01). This Kazakh player came our way in 2012 with her solo record Outside which she made for the Nonclassical label, and although our response was perhaps somewhat overstated, the record exhibited her radically different approach to making classical music recordings, as well as her spirited and unusual technique. It also manifested her appetite for a playing music from a very wide range of composers, a trend which continues on today’s record – seven compositions, from 20th century musicians, minimalists, conceptualists, and improvisers, plus one by herself, and two by 18th century masters from the rich history of classical music, and all (with one exception) written by or dedicated to a violinist.

I’ll sum up the achievement here by saying Orazbayeva honours the intentions of all these composers, yet also makes the music indelibly her own. At the same time, she doesn’t show off, exhibit unwelcome signs of ego, nor add too much unwarranted “expression” to her playing; and there’s a concision and clarity to every note of music, as though we’re hearing a real essence, a distillation. Angharad Davies is herself a violin player of rare genius, usually pigeon-holed in the “free improvisation” bag even though she’s also a composer and one of those working hard to rise above these unnecessary boundaries. Her ‘Circular Bowing Study’ emerges here as a tight integration of musical concepts based around the movement of the bowing arm and (I assume) certain fingering configurations, creating exciting effects with half-stopped strings. In Orazbayeva’s hands, it sounds like the instrument itself is breathing, on the verge of learning to speak.

Bach’s ‘Largo From Sonata No. 3 in C Major’ exhibits all the airtight precision Bach himself could possibly crave, yet the player finds room for grace notes and expressive tones that connect at a deep emotional level. For ‘Alia Fantasia’, a 1720 work by Nicola Matteis, Aisha’s plan is to reveal the solid construction of this Baroque composition, and it’s one of many moments where any artistic ego steps aside to let the music’s essence shine. Matteis was an Italian player who lived in London, and though his music was popular and highly regarded at the time, he was neglected for a long period until the 20th century.

Back to modernism next for Oliver Leith and ‘Blurry Wake Song’; Leith is a contemporary London-based composer also working with electronic music and video. A certain melancholy emotion on this piece (as indeed we find across this whole album), and what I prize in this performance is the unhurried, measured way in which the violinist delivers it, lending a real matter-of-fact tone to the slightly astringent harmonies. James Tenney is an American modernist, represented here by the 1971 work ‘Koan’. So far this is the most “structured” piece we’ve heard on the album, by which I mean there’s a definite form that requires an ascending scale to rise steadily over 8:23 minutes. Aisha Orazbayeva conveys this form with clarity and directness, and to achieve it she sounds like two violinists playing at once, hitting the notes with the accuracy of a master engineer preparing a complex blueprint. Some of the keywords associated with Tenney are microtonal, spectral music, just intonation, process music; Aisha serves him well and communicates his intentions. It makes me wish to hear her play Ligeti, for one.

John Cage has a 1985 composition ‘Eight Whiskus’. I have no deep love for Cage’s music, but I admire the intricacy of the constructions for this one, which started life as a voice work based on a text poem by Chris Mann. Cage somehow turned vowel sounds into codes or symbols which could be understood by a violinist – Malcolm Goldstein was involved in this, as indeed he was in ‘Koan’ – as corresponding to particular bowing positions or degrees of pressure applied by the bow. What could have been a stilted process work comes to life in Orazbayeva’s hands; she’s not only cracked the code, but she’s turned it back into poetry. Lastly her own composition ‘Ring’ – the most challenging piece in some ways – slow, barely-musical scrapes seeming far less accessible than what we’ve heard so far – yet still imbued with this deep and unhappy emotion. Scrapes and plucks do call our attention to the physical properties of the instrument itself, but Aisha is not one of these “materialist” players who foregrounds the qualities of wood or string over the actual music, and sublimation is always the end result. This one feels very personal, as if she’s nursing a wounded animal back to life.

At this point we might want to highlight that this record is her response to the COVID-19 lockdown situation, made at home by herself, simply as “a way to be heard again”. There’s also background information about her two years of maternity leave when she not only learned these pieces, but used the time to nurture a “creative silence, a search for new approaches, repertoire, and ways of playing.” Her music had benefited from that, and now we are the beneficiaries. Very high recommendation for this beautiful record. From 22nd June 2020.