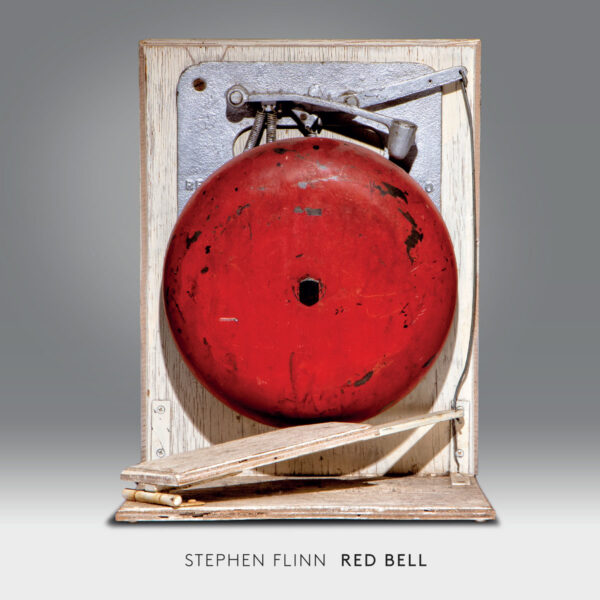 Californian Stephen Flinn with solo percussion record Red Bell (CREATIVE SOURCES RECORDINGS CS 656 CD), recorded in early 2020 at an address in Phoenix Arizona, situated in area of free improvisation, a genre which our man Flinn regards as an “honest avenue for self-expression”.

We have heard him rattling the teakettles before most recently on Irreversible Motions, which he did with sax blower Jason Mears, where he exhibited his distinct cymbal-scraping skills – said ability very much in evidence today on ‘Open Window’, the opening track which builds subtly in unbearable tension until the metal parts are almost screeching in protest. It could be my error to jump to this assumption though, as actually there might not be any metal scraping, if inside cover image speak true then it’s more of a hands-on rubbing and stroking affair which involves making use of the resonant capabilities of an upright tom. You get a track like ‘Breath’ which is far more diverse in its exploratory effects, where creak and rumble sit alongside the metallic wailerage. It still passes on this strange sensation of a taste in the mouth rather than a sound in the ears – as if given an old copper penny to suck under the tongue.

Bit deeper into imaginary sonic dimensional space with ‘Levels Of Sky’, appropriately if understood as some form of abstract art / landscape painting in music, here I fancy I can hear a gong somewhere in the room, or ghosts of other metal percussion in among the slow moving metalloid rings and drawls. And a lovely creaking rumbly noise towards the end, distant thunder, sky falling in. So far one almost had this record “pegged” as an all-metal percussion gazoon, but here comes ‘Divulging’ which includes some hefty low-end drone membrane vibration moments as of giant blimp passing overhead (sadly all too brief before the singing cymbal shrieks in again).

Also here ‘Seeds and Rain’, 8:49 hymn to the agricultural forces that can sustain life, and another indicator of Flinn’s interest in skrying the face of the sky in a weathery context; and ‘Teacher’s Art’, a piece which in title reminds us of Flinn’s current metier. He teachers communication and social skills to challenged individuals, using what he calls a “multi-sensory protocol” to do it; this may or may not involve percussion instruments, but given his outlook on music one is prepared to believe he takes a holistic, near-philosophical view about the inter-connectedness of everything. He seeks the hidden connections that link rhythm and movement to the human mind. Arrived 19th August 2020.