Reviewer favourite Ulrich Troyer from Vienna usually draws admiring prose from our resident writers with his warm and slightly humourous takes on dub mixing, but today he’s here with NOK 2020 (4BIT PRODUCTIONS P009), which is much more of an experiment with glitch electronica. If that sounds like a throwback to 20 years ago, you’re not wrong; NOK was Troyer’s debut for the Mego label in Vienna in year 2000, when it emerged as a six-track mini-CD with a cartoon cover and suggestion that the music be used as a soundtrack for an imaginary animated movie. The record also received an honorary mention at the Prix Ars Electronica that year. Now here it is again, issued on vinyl for the first time, remastered, and bolstered with extra cuts – including some earlier (1998) unreleased material, and two new remixed tracks, one by the Mego demigod himself, Christian Fennesz, plus another by Stefan Nemeth of Radian. For some reason, the album information is also printed in Japanese, and there’s a zany frog image on the cover. Bracing, minimal click-and-cut malarkey; the music has a real purity and clarity, and manages to create barely-there rhythms and slightly dubby effects in a sketchy, diagrammatic manner. The first 8 tracks are so stark and pared-down that when Fennesz’s guitar-heavy remix comes floating in, it’s almost a shock for us to suddenly wallow in such lush chords and textures; Nemeth’s interpretation steers us back onto the stern, no-nonsense pathway, though, even if he does dirty things up with his naughty amplifier hum and buzzy digital belches. Very strong set, highly recommended. Distributed worldwide by Kudos. (19/10/2020) 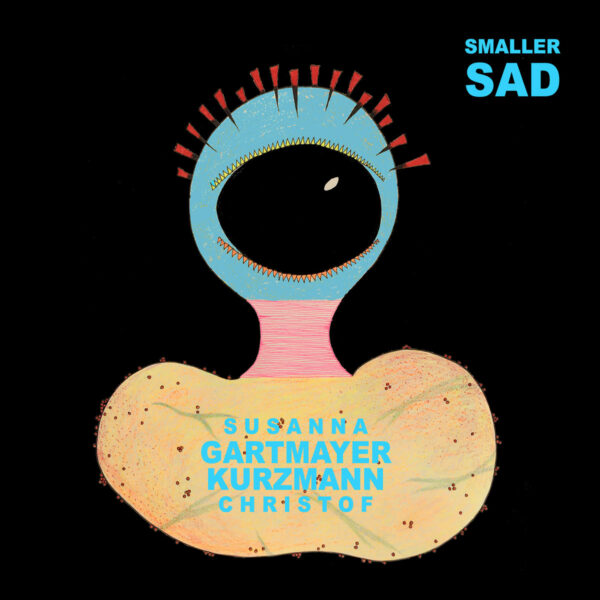 Austrian woodwindist Susanna Gartmayer blows a sweet blast on her bass clarinet, electing to work with an instrument not often heard in our chosen arena (I for one love the warm and deep sound of this earthen stick, especially when puffed by the great Eric Dolphy). Gartmayer scored a big hit in 2015 with her AOUIE album for CHMAFU and GodRec, has accompanied Maya Osnik, and played in the Möström trio to make a concept album about whales. For today’s offering Smaller Sad (KLANG GALERIE gg348), she’s teamed up with Christof Kurzmann who adds live electronics – or perhaps synthesis might be more accurate – for four lengthy tracks of semi-composed / improvised minimal jazz pieces that aren’t really jazz, or especially minimal.

Kurzmann (fellow Austrian) has shown up on numerous Ertswhile and Mikroton documents of EAI from around 2000 onwards, proving an adept at that particular genre, though he’s also a composer and did the highly unusual El Infierno Musical record in 2012 which piqued the literary interests of Dante scholars across Europe. What he’s playing here is mostly a piece of software called ppooll, about which I know less than zero, but must assume it’s capable of intensive audio manipulation and is entirely suited to the hands of a computer expert such as Kurzmann. Excellent engagement and focus from both players on these three studio cuts (and one live festival cut, methinks). My fave piece is the 8:57 ‘Smaller Forms’, though you may prefer the lengthy ‘Novi Sad’ at 16:36. Both cuts manage a successful balancing act between familiar, humanist sounds and the more alien tones emanating from the digital box. There’s also much to savour in the assured and unhurried way these two creators explore the imaginary space they create, without feeling any need to indulge in agitated chatter or over-cooked technique. The only possible exception to that is ‘Little Rage’, which incorporates voice elements, and turns into an episode in emulating throat-singing techniques; comes on a bit too strong for this listener at this time of the morning, but might work after two cups of java.

Otherwise, a nifty set of wistful instrumentals with strong hints of melody and other user-friendly access points, including Gartmayer’s utterly faboo cover painting. (19/10/2020)