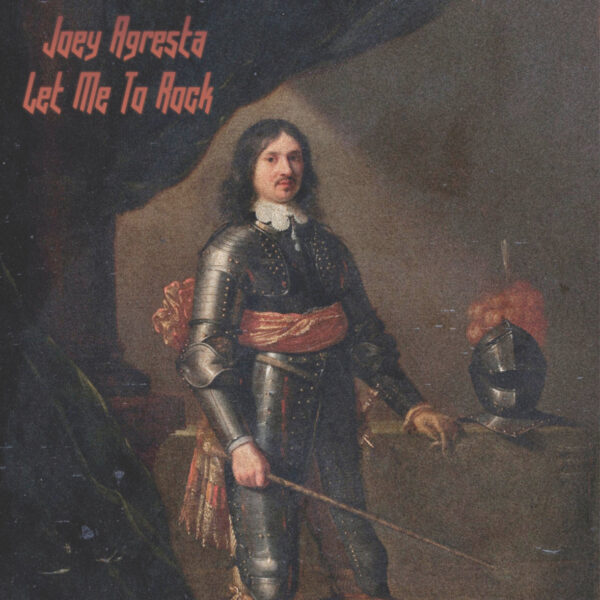 Let Me To Rock (FEEDING TUBE RECORDS NO NUMBER) is an enjoyable set of songs from home-recording genius Joey Agresta of Burlington in Vermont. We have tangentially encountered this fellow previously under his guise Joey Pizza Slice, when he compiled a Meadow House LP for this label. That album was notable for its emotional rawness and unflinching depiction of mental illness and related touchy subjects, and our man Agresta was willing to admit he himself is prone to bleak depression – a confession which carries across to the present LP, created just before the COVID lockdown and a time when Agresta claims he “was increasingly manic, depressed, and drunk”.

It’s not all futility and despair however, as there was a friend named Benny Yurco involved in the realisation of Let Me To Rock, and he came to Agresta’s aid with the loan of his home recording facilities. In an earlier, perhaps happier, time, Joey Agresta not only had a home recording set-up but he had also developed his own unusual approach to overdubbing, due to technical limitations of his device which wouldn’t allow him to playback a track while he recorded another one on top of it. In this way, he’s been recording his songs and releasing them under a series of other aliases besides Pizza Slice, including Son of Salami, Salami Junior, and Chubby Wonder. I don’t have the story on why he disassembled a studio that was evidently allowing him to express himself in so prolific a fashion, but on this occasion at least Mr Yurco came to his rescue and reminded this genial creator about the joys of making music; the sessions went well and he notes how “songs have a way of writing themselves”.

Much of this is reflected in the very accessible surface of Let Me To Rock – short and snappy songs with enjoyable melodies and hooks, concisely delivered and played with much economy, with no self-indulgent nonsense like guitar solos or keyboard breaks. There’s a lo-fi charm in the recordings, with some of the seams showing, and the immediacy and spontaneity of the fellow comes across very strongly. Much of that charm may reside in the tone of his voice, which (although clearly world-weary and reeling from the cruel buffets of life) always comes across as honest and self-effacing. The obvious precedent for this sort of disaffected avant-pop is R. Stevie Moore, a pioneering and highly prolific genius in this field, and more than once I was reminded of Moore during the playing of this LP. Agresta is also quite close to Smog, serving up his dark and troubled lyrics in the palatable form of pop songs, always singing in a deadpan style regardless of how harsh or depressing the subject may be. LP is limited to 100 copies. From 16th October 2020.