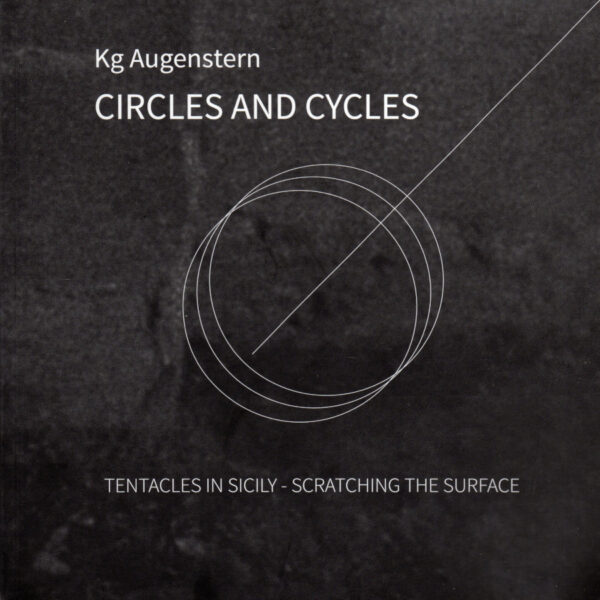 The record Circles and Cycles (GRUENREKORDER Gruen 202) is credited to Kg Augenstern, a name which conceals two creators – Christiane Prehn and Wolfgang Meyer.

They have developed a unique approach to sound art, with their “Tentacle” devices – these are simply fibreglass rods which allow them to rub up against walls and surfaces in the environment around them. This enables them to “extract” sound in some way. The process is summed up in the subtitle of the record, Tentacles In Sicily – Scratching The Surface which indicates where they did it and refers directly to the “scratching” action. The rods, or canes, are extendable; and the creators are persuaded that the tentacles have become extensions of their own arms, or hands, using them like prosthetic limbs to explore the world. They did it before on the 2016 release Tentacles (Gruen 170) for this same label, which visited parts of Germany, France and The Netherlands. Today’s record presents 11 short instances of these tentacle experiments, and the locations are documented quite meticulously in the accompanying full-colour booklet, in the form of photographs (a camera indeed forms a large part of the set-up) and prose descriptions.

I think the linking factor between all these places in Sicily is that they are abandoned; their notes describe them as “contemporary ruins”. The sounds we hear on this CD may not represent the totality of their endeavour; the full experience, I think, is that sounds are presented as live streams, or broadcasts, or played back over speakers in sound installations in galleries, and that they undergo further changes to acquire what are called “audiokinetic” qualities. We do sometimes pick up background noises (e.g. waves from the seashore, traffic sound on a nearby road), but it’s the scratching and rubbing which dominates this CD. I’ve given this record a couple of spins now, but I keep coming up empty; it just seems inert, uneventful, mere process noise. The recordings don’t seem specific enough to me, and fail to tell us anything meaningful about the built environment. Although the actual locations are clearly quite different in terms of their intended original use – for instance factory, store, retail area, chapel – all the recordings appear to be near-identical. I appreciate that these are “subtle experiences that require attentive listening”, but in return for our attention I think we’re entitled to expect a little more from the outputs.

This isn’t to deny that Prehn and Meyer have evidently spent a good deal of time researching and choosing their intended locations. The prospect of exploring an urban wasteland, these “apocalyptic souvenirs of humans’ attempts to form landscapes” as Ennio Pellicano has it in his annotation, is an exciting one; but the artists somewhere fail to meet the challenge, can’t get us much closer to the truth of a building, and don’t convey anything remotely “apocalyptic”, apart from a rather dreary sense of desolation and emptiness. Far from extending our human senses and apprehensions, as is hoped, these fibreglass tentacles tend to have a deadening effect, both on us as listener, and on the artists themselves, who seem to be perceiving the world at one step removed as they tentatively explore and rub against the walls through these prophylactics. For a more worthwhile artistic take on the modern problem of abandoned buildings, see the Torba record from 2019 and the Italian video project that inspired it. From 15th December 2020.