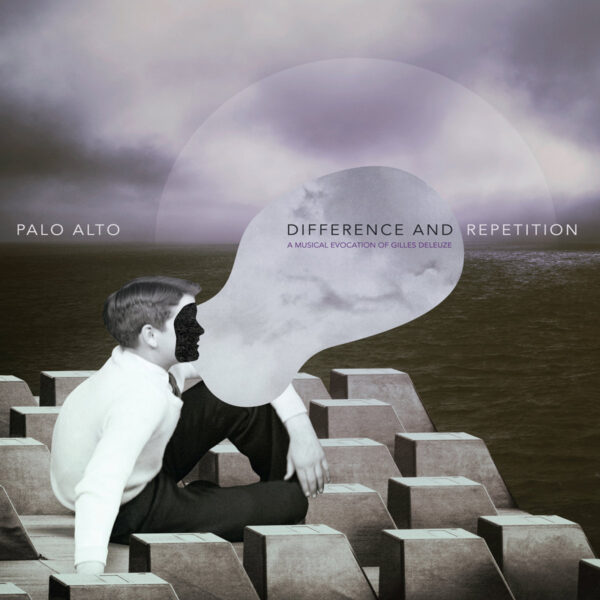 Dense record of French instrumental art-music from Palo Alto, aiming to articulate or invoke the ideas of the philosopher Gilles Deleuze. The album Difference and Repetition: A Musical Evocation of Gilles Deleuze (SUB ROSA SRV484) has found a natural home on the Sub Rosa label, who have elected to release it as a CD and a double LP. I can see immediately how it would work better as a double LP, effectively four tracks touching the 20-min mark (although side 3 is divided into a suite). As fate would have it, we recently noted a record on Klang Galerie by Denis Frajerman who has been a member of this group, and appears on one track. Palo Alto have been making records since 1990, and their members seem to share a healthy mixture of tastes and musical influences, including French prog and New Wave (especially Ptose), krautrock, the Canterbury school of UK jazz (Soft Machine, Caravan, National Health), and Francis Poulenc, a member of Les Six in the early 20th century; members currently include Jacques Barberi, Laurent Pernice, and Philippe Perreaudin, and they see this release as an opportunity to mark their 30th anniversary.

As to the work of Gilles Deleuze, I have never read a single page and don’t even pretend to understand his themes, but it’s interesting to note the influence he has had in the field of experimental music, or at least as a reference point for many. I happen to have a copy of Folds And Rhizomes For Gilles Deleuze (also on Sub Rosa), a 1995 set of electronica including contributions by Main, Mouse on Mars, Oval, and Scanner; I have no idea if the then-current prevalence of “glitch” music was analogous to a rhizome. However, I do know there’s a connection with Richard Pinhas, the famed French musician from Heldon, who has been dedicating albums and tracks to the philosopher since 1977’s Rhizosphere. It turns out he studied under Deleuze in the 1960s, a time when the book Difference et Repetition would have appeared (1968), no doubt coinciding with the May 1968 uprisings and the spread of ideas from Guy Debord. I mention this as Pinhas adds his famed Fripp-inflected guitar on track one, plus there’s a short reading from a Pinhas text indicating that our man has also published his own research relevant to the subject, explicitly connecting the ideas of G.D. to music. Phew. The name of this track is also enough to frighten off the lightweights like myself – it’s called ‘The Tears of Nietzsche’, referring no doubt to G.D.’s critique of his work – one thing Deleuze was known for was the analysis of other philosophers, presumably putting them in a context that made them more accessible to modern readers.

The music in support of all this is a swirling mass of synths and echoed sax blurts, along with ominous and slow bass pulses, inching the mind towards some inescapable conclusion; the surface sound is dense and cryptic. The second cut ‘Rhizome’ is a bit more approachable with its steady beat to structure the washes of anxious electronic murk, and almost approaches dubby realms; that’s Barberi blowing his “deviant Tibetan horn” to summon forth the legions of intellectuals from history, while guest player Thierry Zaboitzieff adds amplified cello. Parts of this piece reminded me of any given Jon Hassell album, but much less benign in intent. For side three, we have the ‘Triptych’ – three shorter but connected works, much more text heavy, with Alain Damasio doing the voice readings. Damasio is a science fiction writer for TV, comics, radio, and the movies; another overlap with Pinhas themes, methinks. He barks out his own texts and also a passage from Mille Plateaux (the book that is, not the label) on top of some effective but very harrowing synth noises and treated sax blasts enhanced with digital loops and echoes; I found this the least enjoyable segment of the whole set, but I expect it’s the one that comes closest to that “musical evocation” of their hero that Palo Alto are aiming at. I mean it probably articulates and communicates something about the nature of chaos and entropy.

With the closing track, ‘Difference et Repetition’ we’re back in Jon Hassell territory again (although in place it’s not far away from Kevin Martin and Techno Animal) with another user-friendly instrumental sprawling over 19:06 mins and divided into five main parts; the guest player here is the great Rhys Chatham, adding his excellent trumpet work to the well-constructed synth, bass and drum backdrops, and the singing group Les Bottines (five female vocalists) also do a lot to sweeten the deal, on what I assume is another ponderous and complex knot of philosophical ideas recast into musical form; the five section titles are enough to give me a migraine. In all, a distinctive and effective record – it may not have persuaded me to start reading Deleuze, but I would certainly like to hear more from the catalogue of Palo Alto, who seem hard to pigeonhole even if it’s tempting to slot them alongside Heldon / Pinhas and certain French Zeuhl bands. Julien Pacaud did the nifty cover art; given his diverse career in life (he’s been an astrophysician, Esperanto teacher, and a hypnotist – and wants to be a time traveller) he somehow seems the ideal choice for a record like this. From 29th January 2021.