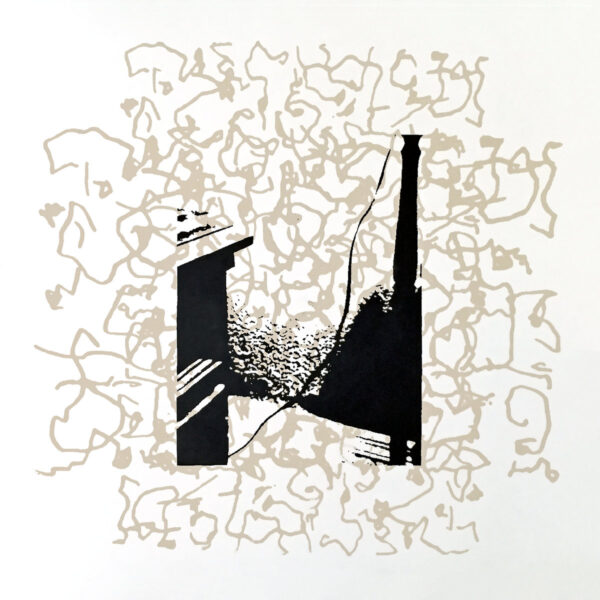 Naturaliste are an American foursome of players who first got together in Omaha in 1998 or 1999, and have surfaced now and again on a handful of obscure cassettes and CDRs plus assorted live performances, events which seem to have divided listeners and created conflict or confusing situations. I’m picking up a few stray hints suggesting they almost relish a certain amount of provocation with their own audience, and they might enjoy picking fights with the sound mixer on the night of the gig.

I’ve never heard of Naturaliste before, although one of them is our good friend Bryan Day, famed SF improviser and instrument builder and maker of crumbly non-music for many years, and who famously runs his Public Eyesore and Eh? labels dedicated to showcasing musicians in sympathy with his own sensibilities. The other Naturaliste members are Christopher Fischer, who operates the Unread cassette label in Pittsburgh; Charles LaReau, who may have played in Das Torpedoes and Bull’s Blood; and Lonnie Eugene Methe, who appeared here in 2018 with his weird tape which attempted to deconstruct the Brideshead Revisited TV show using loops. I’m really not sure how often Naturaliste play together or meet up or rehearse or whatever, and they may have been lying dormant for about 15 years since their last release, but I’m very impressed by this Temporary Presence (GERTRUDE TAPES GT 042 / PUBLIC EYESORE PE 147 / UNREAD RECORDS 264 / ALMOST HALLOWEEN TIME AHT 104) album.

As far as I can make out, the six tracks here were captured at a single performance in 2019 in Shanghai, when the quartet rented out Maggie Wong’s instrument shop for the night, and set up with their clutter and boxes, plus various bits of electronic junk and non-musical equipment (such as broken fans), and also leapt forth to assault any instruments which may have been handy in the room, including a piano, an erhu and a guzheng. To make things even more over-crowded, the entire set was mixed up with pre-recorded tapes of individual improvisations from the band members, all feeding into the general airless swamp of musical noise. So far this may sound like a formula a total train-wreck, but somehow things manage to stay on the right side of chaos, and indeed the six pieces here not only deliver an exciting musical frisson, they also maintain the overload of sound sources in an equal and pleasing balance. This might be due to the judicious editing and mixing skills of Mr Methe, but the players contribute to that balance too – they are not irresponsible power-noise merchants nor trying to hog glory from each other, and underneath the strangely anonymous murk of horrifying swampery and sludge, true interaction is taking place and individual voices clearly emerge.

One element I especially like is the taped and sampled voices played back with a chilling echo effect, so that many tracks resemble the start of a nightmarish horror film; that’s not a new trick, of course, but it works very well on today’s spin and these four Americans seem to have their own creepy take on the method, unleashing a whiff of psychic menace. There’s also glorious moments of musical craft – demented synth playing, oddly haunting piano figures, and several seconds of Harry Partch being fed through the wringer; the latter exploit may have been accomplished on the traditional Chinese instruments, mentioned above. These details aren’t showcased like “solos” in the conventional sense, rather they emerge from the churning cauldron of music and noise bobbing up and down much like the shape-shifting cyborg in the furnace at the end of Terminator 2. Thrilling, dramatic material; an LP which never outstays its welcome. It’s released on four separate labels (those owned by the band, I assume), and the artworks supplied by the band are mostly high-contrast photos and near-abstract images which hark back to the days of photocopied and hand-made cassette covers. Screenprinted covers and limited to 100 copies; plus there’s an even more limited version with hand-drawn covers. From 27 January 2021.