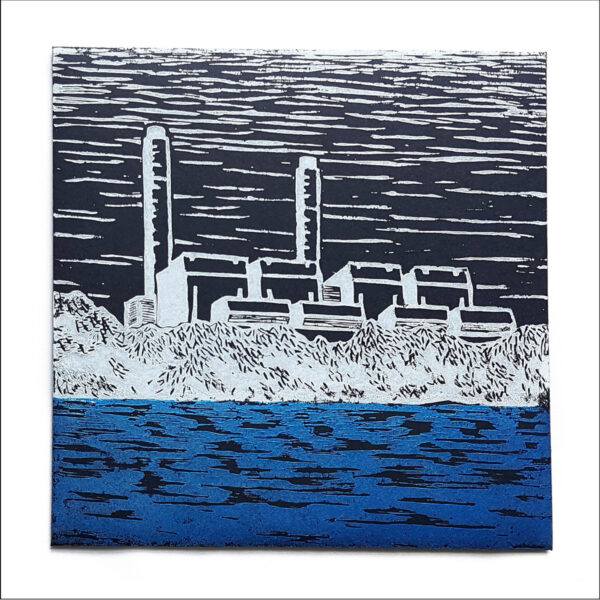 Got a new 10-inch release by Little Skull, following on from the 45 RPM single which was the second release on this “small is beautiful” English label. Little Skull is Dean Brown of New Zealand, a musician about whom I still remain largely uninformed, and it might be that he prefers to adopt a low profile as he pursues what is evidently very personal and private music. Today’s record Lower Hope Reach (HORN OF PLENTY hop6) is somewhat more upfront than the previous record, but it continues to feature melancholy and slow acoustic music, some of it capable of drawing forth unbearably poignant emotions with its bittersweet charms. It might have been produced with guitars and stringed instruments (e.g. violin or cello), perhaps with a little added studio enhancement for added depth and warmth. On side one we get three very melodic tunes, each stirring many a nostalgic memory for the sensitive listener, but this user-friendly mode soon gives way to the darker leanings of the B-side. After one exquisite two-minute miniature, we have the much longer untitled piece which casts its eerie spell in around 12 minutes, and allows the musician to stretch out into long-form actions and also to explore his imaginary landscapes in a more experimental, sketchy manner. To put it another way, there’s more spontaneity in evidence than on the first side, but then there’s also something to be said for the charming construction of the “pop music” side.

The label notes use keywords “minimal”, “naive” and “folk” to characterise this modestly-scaled but beautiful music; we need to add that it comes directly from the heart of Little Skull, and is bound to win over the hardest of listeners, bringing out inner reserves of empathy and wistful feelings. As ever with this label, there’s a very pleasing and elaborate package for the vinyl edition, using hand-made linoprints for the cover and inserts. Each scene is a landscape with a serene blue stretch of water underneath it, even in scenes where it doesn’t seem to belong. My favourite image is the abandoned car in the woods, with the back windshield smashed and one door half-open; next to it, a derelict washing machine which also has its door open, as if in sympathy for its fallen brother. It’s an evocative picture. Needless to say this vinyl edition sold out very quickly (we received a copy in February), but a digital album can still be purchased. From same label, we have a full-length LP Rural Objects (HORN OF PLENTY hop5) by Francis Plagne, a fellow Antipodean (from Australia). For some reason I thought I had encountered the work of this talented multi-instrumentalist before, but only through one contribution on the Loose Canon compilation put together by Oren Ambarchi in 2005. Matter of fact, Oren was the fellow who also released Rural Objects on his Black Truffle label, and before that it was a cassette on the label Hobbies Galore, but as these exotic items never made their way to my doorstep, this domestic issue is very welcome; it also adds two bonus tracks to those previous editions. 14 tracks of all-instrumental music created almost entirely by Plagne, apart from drums on one track from Joe Talia – our man Francis plays everything in sight, including multiple guitars, keyboards, percussion, flutes, tape loops, zither, and even a basic drum machine as he aims to walk off with the coveted “Mike Oldfield for the Millennial Age” prize at the next Mercury Awards. (Not really.)

This LP is far more upbeat and accessible than the Little Skull above, a comparison I make just to indicate the warmth and user-friendly surfaces that Plagne evidently has tremendous facility in creating, and he blends his layers with an insouciant ease that doesn’t call attention to the craft, pairing the voices of his many instruments to bring out exciting and tasty textures. Some tracks, especially the early bounceroos on side one, could pass for a form of pop music in the right light, while others resemble a form of pleasantly-degraded trip-hop that makes you wonder what would come to pass if Plagne had been recruited by Massive Attack or Portishead in an earlier time. Besides these more tuneful and foot-tappy moments, Rural Objects also delivers episodes of very queasy strangeness, not unlike those 1970s Eno albums, especially Another Green World – where Eno delighted in applying offbeat sideways thinking in the studio to summon up benign colourful creatures from the swamp of his fertile brain. In like manner, Plagne creates uncertain landscapes or other-planet dreams, thankfully free from the clichés which lesser musicians succumb to, as they take laboured cues from their T. Dream and Sun Ra collections. Speaking of evading cliché, isn’t it fab the way that there isn’t a single moment of aimless drone on this whole album? It convinces me that, despite the insouciant surface appearance to this album – as if he had just thrown it all together on one sunny afternoon – there is in fact lot of compositional strength and craft at work, giving these tunes a good structure and ensuring that all the component parts hang together, even if the finished result can be nebulous and fuzzy around the edges.

I’m assuming it takes a rare talent to achieve this. According to the Horn Of Plenty website, these objects “glide from the bucolic to the ethereal”, an apt description which cannot be gainsaid. Also note the packaging on this one – it includes a double-side art print of a drawing by Plagne, who also drew the cover art squiggles – not as extravagant as other packages on this label, but I am pleased to note it has a flipback sleeve (i.e. flaps folded over the back, like an old Beatles LP cover). I have sometimes wondered if this form of manufacture was still possible, and evidently it is.