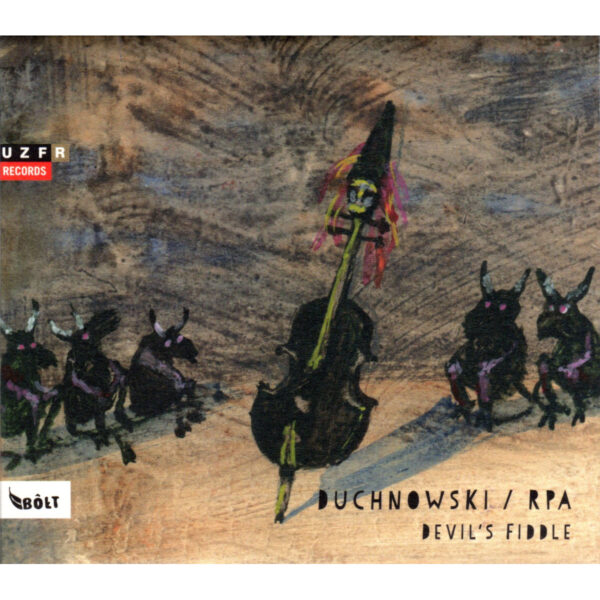 Two not-unrelated records of contemporary music from the Polish Bolt Records label and both featuring the work of composer Cezary Duchnowski.

We heard this young enterprising chap in 2012 as part of the trio Phonos ek Mechanes, and even then he exhibited his interest in electro-acoustic composition and computer manipulation. Broadminded, he is not averse to allowing free improvisation and jazz elements into his compositions, as well as computers and electronics, and has composed music for small ensembles and entire orchestras, plus there are works involving tape, spoken word, and multimedia. Indeed today’s work appears to be an opera; he staged Devil’s Fiddle (UNZIPPED FLY RECORDS / RADICAL POLISH CULTURE RP03) in response to a commission from the Automatophone Foundation and recorded this version in 2020 at the Lublin Centre for Culture. He’s joined by the Radical Polish Ansambl, who we first heard on their 2019 debut album, and also by a number of soloists adding voice, tuba, electronics, percussion, and fiddles – and also playing parts of characters in the story.

As to that, I read the tale as an update on the legend of the local village fiddler who is challenged by The Devil; this myth appears in many forms and in many parts of the world, including the popular C&W song, ‘The Devil Went Down To Georgia’. Depending on which version you read, supernatural elements will be a feature of it; judging by the general eerie mood and uncanny atmosphere created by this odd record, Duchnowski is not averse to said features, exploring the metaphysical realms of the unknown with his music and texts. The fact that two creators here are credited with “lucid dreaming” only serves to add a further oneiric, slightly surreal, dimension to the enterprise. Certainly the musician/actors playing their roles give us some exceptional examples of weirded-out song-speech in their performances; unfortunately for us English speakers, it’s all sung in Polish. But we need to respect the integrity of the composition; there is a Polish Folk music strand to the work too, and who better to serve that than the RPA, who are still very determined to work through their own exciting update on the Polish mazurka form. Add to all this a full-colour booklet of paintings by Pawel Hajncel, telling the story in naive child-like images, and you have a powerful package of rich information to digest. Jointly released by Unzipped Fly Records and Bolt Records. 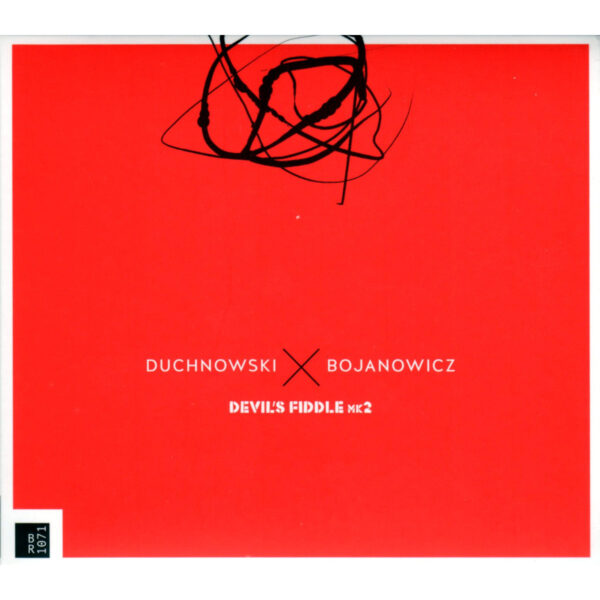 In contrast to that large-scaled Ensemble work with all its instrumental and vocal richness, Devil’s Fiddle MK 2 (BOLT RECORDS BR 1071) is very intimate and more austere. Here the compositions of Cesary Duchnowski are played by the cello of Magdalena Bojanowicz, accompanied by the electronic music of the composer. The pieces here, some of them excerpted from larger compositions or newly scored for this set-up, have no connection to the opera story above as far as I can tell. Duchnowski’s aim is to explore the possibilities in the “rich, unlimited forms of sound expression” which this duo project offers him; it depends very heavily, for him, on a good partner and a good working relationship, and he confesses he finds the duo format “probably the most involving performance formula” for him. Magdalena Bojanowicz is a virtuoso with an open mind for sure, but she hasn’t always worked with electronics, and isn’t quite the same disciple tres convaincu as Cesary Duchnowski. He’s so enamoured of both acoustic and electronic sounds that he sees their combination as enacting “a peculiar pact with the devil” (hence the title of the CD presumably) – it’s a way of stretching forms to their limits and taking human endeavour into places never thought possible.

Extraordinary sounds result, quite often barely familiar, but we can still hear the wood and strings of the cello in among this unearthly fabric, both player and instrument being pushed into highly unfamiliar and less-than-comfortable zones, yet the journey is always exhilarating. In attempting to account for his own achievement, the composer simply reaches for a number of single-word titles to describe the sound in material terms – wooden, iron, pale, hairy, quartzy…he admits that he “wishes it could be tangible”, as if he were making modern sculptures. He regards this simple naming schema as sitting “on the verge of alchemy and magic”, once again confirming that supernatural theme on the Devil’s Fiddle opera record. I know the “alchemy” metaphor has been somewhat over-used in the context of electro-acoustic music’s transformative capabilities, but here Duchnowski makes good on the promise. Both the above from 1st March 2021.