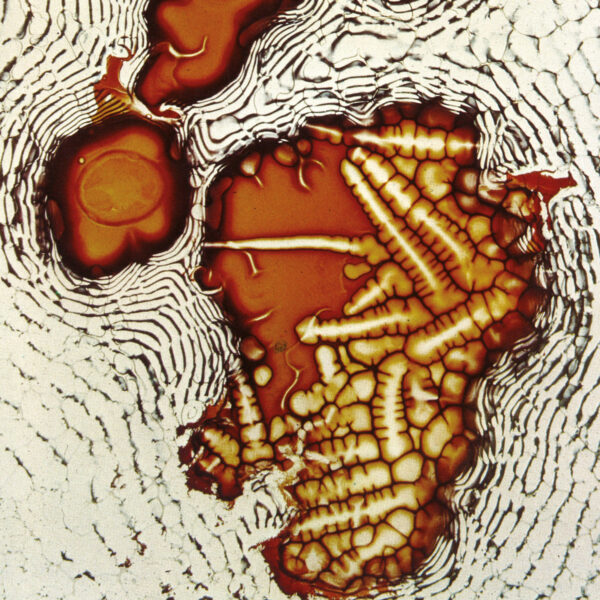 Duo improvisation from the team of Axel Dörner and Richard Scott on A Journal Of Elasticity (BOHEMIAN DRIPS BD014) produces strong results. It’s a trumpet and electronics thing, but given the added frisson of being recorded inside a huge water reservoir, specifically the one in Berlin-Prenzlauer Berg in the highly popular borough of Pankow in Berlin. More about this tank shortly.

Axel Dörner is continually upping his game with the old brass umbrella, and in 2020 I was pleasantly surprised by his work on the Omejeno Gibanje / Confined Movement LP for Zavod Sploh, where I sensed a slight tinge of aggression to his playing, along with improvements and upgrades in the fluid gargling of his unique tone. No longer can I sum him up by referring to the “reduced playing” model of yore. His performative presence likewise makes itself felt on this Elasticity thing, but the main thing to listen out for here is a constant unpredictability in the sound – to put it mildly, things keep changing all the time. This is partly due to Scott’s elaborate electronics set-up (modular synth and a Synthi A) and the presence of the “Tetrassi”. This fiendish piece of gear is created by Ciat-Lonbarde for all these modernistic modular synth types, and they use the kind of product description guaranteed to generate maximum drool among the customers: “a mandala of analog oscillator circuits that can cross-modulate to form the empire of infinite circuitry known as pure sonic chaos.”

To add to the instability of the Berlin-Prenzlauer situation, Dörner himself was likewise “wired” for further surprises, his trumpet work sampled in real time and fed into a special controller interface built for the occasion by that modern demon, Sukandar Kartadinata, an associate of the Bicrophonic Research Institute who has also built special devices for Reinhold Friedl. The meat of the live work on A Journal Of Elasticity shows our two heroes jostling for space, as they try to hold their ground and wrestle with the ever-shifting platform of sonic diablery concocted by the technology…in this river of constant digital change, the press notes invite us to savour the “friction and tension” that arises between the two musicians as they negotiate the slippery turf. Sparring like two seasoned wrestlers in a bath of mud, they make good with their muscular limbs. Of course there’s a third unpredictable component, and that’s the acoustics of the reservoir tank itself. A tremendous amount of natural echo and reverberation you may be sure…and it’s accentuated by the two sides of the LP, one side done in the empty tank, the second one recorded in front of an audience (when warm, heaving bodies counteracted some of the errant acoustic effects with their muffling). This was all planned by the organisers, who curated the “Speicher” festival with the aim of presenting challenging site-specific performances, where the venue itself would have to be reckoned as another player in the band.

Others who were thrown into this “sink or swim” situation included Microtub, who did it in 2019 on Chronic Shift, and Tomoko Sauvage (see the Fischgeist album). The situation, in this instance, not only results in some 36 minutes of strange and gnarly noise pressed into the grooves, but it challenges notions about the “purity” of recording live music in a venue, offering a cauldron of sound where instruments, processing, actions, environment and audience are all simmering and boiling in a lively hot mess. From 17 May 2021.