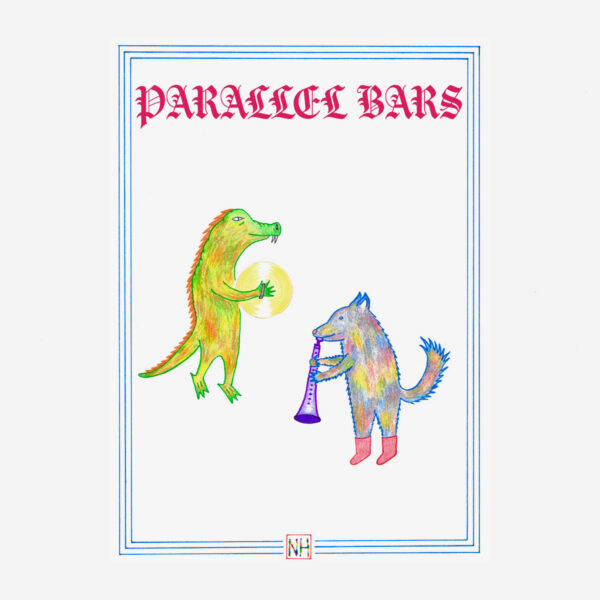 Nick Hoffman here with Parallel Bars (PILGRIM TALK PT41) …in many ways a continuation of his 2018 cassette Baroque Classics (For Electronic Oscillators) on which he performed a selection of post-Renaissance music by European composers using his special oscillator patch.

Some three years later on Parallel Bars, that same patch is deployed, but now he’s adding vocal elements, with the help of the “Vocaloid” voice synth, a product of Yamaha. This Vocaloid software has been around for 20 years now, and I assume it’s now a standard piece of kit on many a digital workstation. As a non-practitioner, what interests me is that you don’t actually have to sing anything with your own voice to get a result from the Vocaloid; you simply have to compose, or input, a melody, and type out the lyrics. Somewhere in its memory banks is enough processing power to convert this data into a completely artificial “song”. Customers who own version 5 will find a bundle of four voices included with the package, where previously these elements had to be purchased separately.

I’m very impressed with the way Hoffman is using these two approaches, creating entirely synthetic results for both the musical and vocal parts of the scores which he tackles; the repertoire this time is also different to the first tape, including Purcell, Dowland, Pergolesi, Frescobaldi, Orlando de Lassus, and even one by Handel. He’s gone a little outside the limits of the Baroque period, but still represents some of the finest musicians from England and Europe of the 17th and 18th centuries. While I’m not at all an expert in this period of music, I think one of the things that has developed among purist listeners is an appetite for hearing it played on period instruments, thereby achieving a sense of authenticity. Naturally, a record such as this by Hoffman flies in the face of all that, with not a single acoustic instrument in sight, let alone an authentic one rescued from the Musical Instruments Museum in Brussels. I suppose most mainstream classical listeners, faced with this marginal tape, would throw up their hands in horror; me, I love it.

As before Hoffman exhibits his gift for clarity and precision in the music, and the digital methods here I assume allow him to produce note-perfect results with not a single fluff; it’s an approach that is, I would argue, tailor-made for the near-architectural structures of this genre of music, with its mathematical ordering of melodies, notes, and counterpoints. Nick Hoffman also shows he loves and respects the music, and produces work of tremendous beauty; there’s nothing post-modern or parodic going on, it’s genuine through and through. And for all the supposed “coldness” of pre-programmed computers and synths, there’s plenty of warmth and humanity in these performances. All of this may be saying something about the our currently over-mechanised culture, the role that computerisation now plays in just about everything, and what we suppose the meaning of music and art to be; but even so it’s a wonderful artistic statement and a very coherent realisation. Tune in now to enjoy this fine programme of “automated chamber music”. From 19th May 2021.