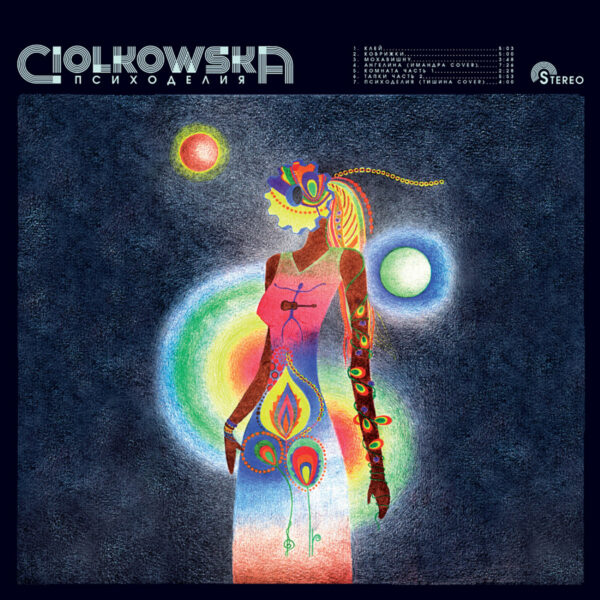 Herewith another bundle of CDs and one cassette from the Moscow label without a name, sometimes called the Addicted label, sent to us by Anton Kitaev (its co-owner). All the below from 15th June 2021.

Ciolkowska call their album Psychedelia (NONAME666 740) and release it with cover art which looks like what would have happened if Kandinsky hadn’t discovered abstract art and instead went to America to paint covers for Weird Tales magazine. This four-piece from St Petersburg play songs and instrumentals ins a mode described as “space rock” by other online reviewers, and there’s evidence that the record has found favour with many proggy diehard listeners. They have a good line in twisty song dynamics and melodic lead lines, courtesy of the leader Egor Svysokihgor who plays lead guitar and sings, plus they have a ukulele as a featured instrument, played by Alesya Izlesa, lending a quirky touch which I wish they would emphasise a bit more on an album of what is otherwise merely competent and conventional rock music. Like Pree Tone below, they suffer from weak lead vocals, and though Egor strains hard you can’t really feel enough force or conviction in his words. I also wish I could find the elusive space-rock vibe that others are digging, but Ciolkowska just aren’t freaky enough to fly with space captains such as Hawkwind, Gong, or even Magnog.

Wayward songs from Pree Tone from the Ukraine on their Brekka (NONAME666 756) album. Last heard in 2018 with their Kiddy album. This guitar-bass-drum trio are evolving their own distinctive voice and starting to take steps outside their indie-rock influenced comfort zone. Also they’re learning how to make their songs punchier, more concise, such that this 5-song item never outstays its welcome. Their “big sound” production lends a sheen of energy to those moments when the band shift into overdrive, hammering home key points in the song by use of over-zealous drumming and layered guitars. Nice to hear some actual songs here, but the singer needs to beef up their vocal muscles a bit; he sounds like a tired guest singer failing the audition for a Rain Parade album.

Crust are firmly in the genre of contemporary doom and death metal and their album Stoic (NONAME666 752) certainly looks the part – black cover background, elaborate artwork redolent of death and decay, plus they have their own logo drawn more or less in a Black Metal style. Vlad Tatarsky plays guitar, Arthur Filenko the bassist also provides the usual screaming throaty vocal that is demanded of those who play in this mode…enjoying the grim and grandiose sound of this one which delivers the hoped-for sensations of lurching through concrete, but sometimes feel let down by the very conventional heavy-metal guitar solos which cut through the general churning racket and tend to ruin the mood. Plenty of oppressive themes in the song lyrics, referring to pain, death, madness, dreams, and the “pitch black darkness of delusions” on songs with titles such as ‘Plague’, ‘Anhedonia’, and ‘A Blind Man in Darkness’. Like many hardcore straight-edge types, Crust seem to have developed a very unforgiving stance as they express their terminal disappointment with the lamentable state of the human race, seeing everything as stark either-or choices. Was also reviewed in more detail by Jen. 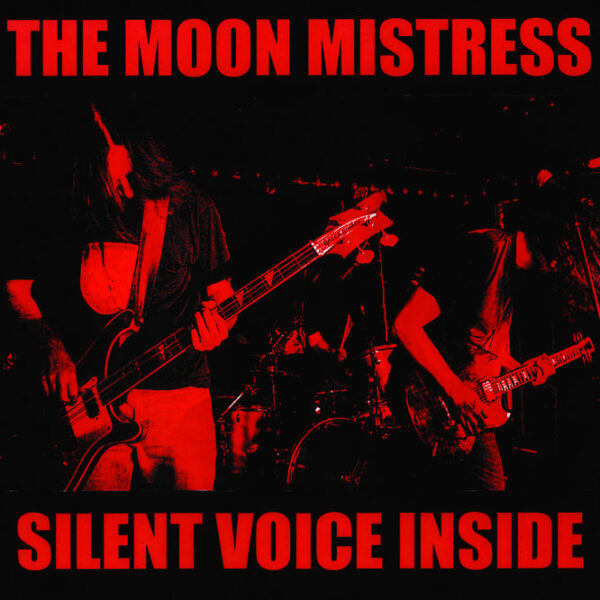 Metal fans will also enjoy The Moon Mistress, whose Silent Voice Inside (NONAME666 747) plainly owes a huge debt to Black Sabbath – the guitar sound, the rhythms, the remorseless riffing, and even the vocals bear no small resemblance to the best work of The Sabs. This is the only album made by the trio of Garish Cyborg, Memphis, and Mitya DHS, and it originally came out in 2012 on the Pestis Insaniae label. Along with the usual deathly and bloodthirsty tropes, plenty of supernatural and semi-satanic themes on songs like ‘Cremation Meditation’, ‘Cease To Exist’, ‘Invocation to Hecate’ and ‘The Wicker Man’. I’m finding this item one of the more enjoyable records in today’s batch – the band have a real attack and focus, serving crushing heaviness with a good deal of conviction and strength and economy, and are preferable to latterday Sabs copyists like Cathedral or Electric Wizard, even. This CD version includes two bonus cuts ‘Heavy Sun’ and ‘Mindlock’ not present on the original album.

The Grand Astoria are another St Petersburg band…hard to categorise From The Great Beyond (NONAME666 770), a six-track item of songs and instrumentals written and performed by Kamille Sharapodinov and made with the help of a large crew of collaborators and performers. In just six songs they touch on many musical styles, one moment wallowing in heavy-metal guitar histrionics like Slayer, the next moment soaring away on multi-layered space-prog epic voyages, with tasteful keyboard flourishes and flute-drive interludes. Sharapodinov may turn out to be a man with a vision equal to that of Richard Pinhas crossed with Jon Anderson, and this album may grow on you if you can get past its rather self-important tone, its overwrought and melodramatic presentation, and its restless genre-hopping.