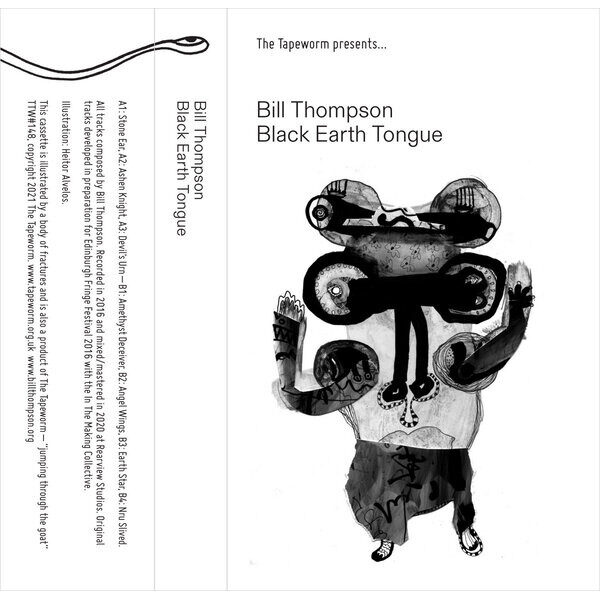 Black Earth Tongue (TTW#148) is the latest cassette from the American performer/composer Bill Thompson, this time released on the heroic cassette label The Tapeworm rather than his own Burning Harpsichord label.

He tells us that Black Earth Tongue has some affinities with his own Blackout piece, a somewhat conceptual work which involved the systematic deletion of music files from his hard drive; he’d built up a considerable library of audio files over time, often using them as part of his performances. Another departure is that the tracks are notably shorter compared with his usual long-form mode, although the tape does lead off with the 17:46 minute ‘Stone Ear’ which has all the slow-moving and mysterious qualities one associates with Thompson. This music was originally realised as part of a collaborative project called Mushroom, a contemporary dance piece performed at the Edinburgh Fringe in 2016, and some of these short titles refer directly to certain species of fungi, my personal favourite being ‘Amethyst Deceiver’, a purple toadstool found in the woods which (although edible) can contain traces of arsenic – a tip for all you budding Agatha Christie fans. Quite often when I learn that music is intended for a dance piece I tend to think of something lively and spirited with a steady beat, but clearly my conception of modern dance is very limited and in need of updating. At any rate, the unhurried but inexorable pace with which this grand music builds and swells to a slow crescendo is indicative of a much more disciplined and controlled form of body movement.

I’m unsure as to the actual means of production, but (as ever with Thompson) the music never sounds over-processed or inhuman, unlike some modern drone with its digital-clean surfaces. On the contrary, the juice of life can be found swirling and pulsing through every second of these slightly ominous tones, as if emanating from the brain of an ancient mystic who says nothing, but whose wrinkled and aged visage contains the wisdom of a thousand years. These qualities aren’t just due to distortion, though a drop or two of fuzz may be a part of the recipe, but may be something concealed in the careful layering of elements; at times we almost seem to hearing one sound “through” another, like stacks of window frames with slightly wobbly glazing. Particularly exciting is the rich stew of sonic information presented on ‘Angel Wings’, one which grinds with a shade more urgency than the more stately tracks, and includes snippets of radio static and chattering voices, finger-bells, and much tension in the two-way push-pull of its grainy surfaces. The fungus Angel Wood is known as a mildly toxic (if consumed) growth which also has the capability of making wood decay through sheer persistence; Thompson’s music doesn’t induce decay, far from it, but it does have that same streak of persistence. From 30 November 2021.