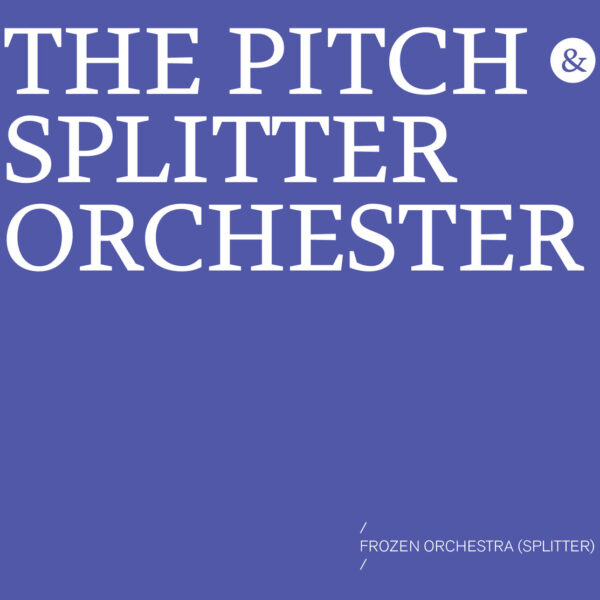 The Splitter Orchester are this very impressive avant-garde orchestra of top players based in Berlin. We heard them doing a great record with Felix Kubin called Shine On You Crazy Diagram in 2017, and that year also saw the release of Creative Construction Set with George Lewis, which Steve Pescott found to be a “three-part monolith” praising the Orchester for being “completely au fait with that blurred, gauzy space between improv and scored works”. Here on Frozen Orchestra (Splitter) (MIKROTON CD 61) we see them play with The Pitch, a quartet of which three members also play with the Orchester, and the result is one hour of intense orchestral droning, scaled on a monumental level.

The Pitch are also committed to this single-minded form of free improvisation, but what has always impressed me – last noted on their cassette for Granny Records – is how they deliver an understated and quiet power with just four players, and with a semi-acoustic approach. Well, Frozen Orchestra has that same force behind it, just somehow multiplied and operating on a grander scale; there is evidently no need for any player to stand out, there is no need to vary the volume or erupt into noise, and the work proceeds in an unhurried manner with deadly calm. One can only imagine the collective discipline that’s required to pull off a feat of this nature; and while the composition of this piece is credited to The Pitch, the end result is that 23 musicians are moving almost as one. For me personally, the 1968 Columbia recording of In C was for a long time the benchmark of how a large ensemble could successfully operate a benign form of “group-think” to realise beautiful music; but that landmark recording now seems ragged and sloppy compared with the eerie, icy precision which these German technicians deliver.

Many of the great names in the roster – Axel Dörner, Robin Hayward, Kai Fagaschinski, Burkhard Beins, Andrea Neumann, Ignaz Schick, Michael Thieke – have put years of effort into building their craft in various forms of “reduced playing” and associated music; a record like this can be seen as the payoff, or rather just one of many milestones in their collective achievements. Recorded in two days in December in the studio, this is an astonishing, near-monumental work of art. From 30th October 2018.