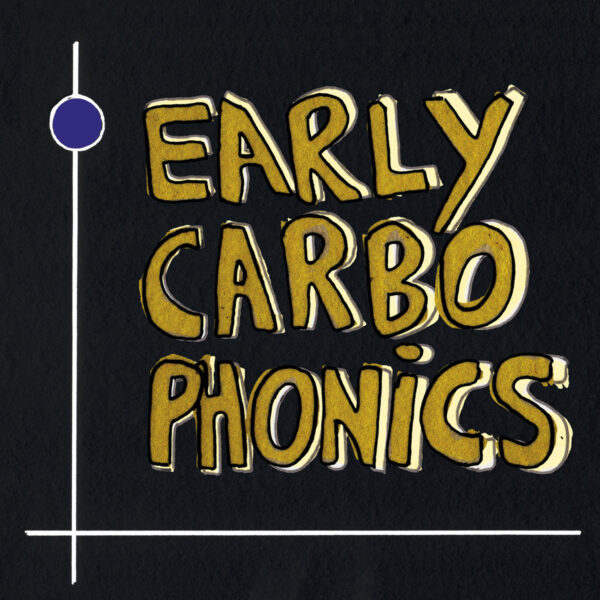 Early Carbophonics (MAKIPHON 005) is the latest release by Andreas O. Hirsch, and it’s a 10-inch vinyl item containing eight tracks. We first got wind of the Carbophone, and its sister instrument the Electric Palm Leaf, in 2015 when we noted Hirsch’s Summe 1 LP…and observed that the Palm Leaf is “a beautiful half-sculpture instrument he invented which involves elastic bands, carbon rods, and wooden beads inserted into a dried palm leaf, and powered with contact microphones.” The Carbophone also uses rubber bands and carbon rods, works much like a souped-up African kalimba or mbira, and judging by photos it looks like a fascinating cross between a toy pinball machine and a science model used to demonstrate something about the construction of atoms.

Hirsch invented and built both of these instruments, and though he’s been making music with them since 2015 – most notably on a radio show for Mark Vernon and Barry Burns – this is the first time we’ve got the Carbophone captured on vinyl. Fascinating sounds result. To begin with this is not a purely “acoustic” percussion record, as the Carbophone is an electro-acoustic device, and Hirsch applies certain electronic enhancements, including effects, processing, editing and sampling, to nudge the music back into a realm he’s clearly comfortable with (as noted on his unusual dub-percussion single Stalker/Swoop which he made with Richard Eigner in 2016). Secondly, it’s interesting that he doesn’t aim for a lilting African rhythm, nor try for a tricky jazz-based swing feeling; instead the beats and rhythms on Early Carbophonics are pretty straight-ahead four beats to the bar, emerging like a quirky form of avant-disco with foreign effects and added electronic enhancements. This isn’t to deny that the record has a strong line in off-beat pulses and cross-currenting rhythms, which when they emerge feel like two fish swimming against the tide in opposite directions, with exciting results.

To find out more about Hirsch’s thumb actions and nimble plucks, be sure to check out the videos he made on YouTube – search for “out of office” and “Balfolk”. From 6th November 2018.