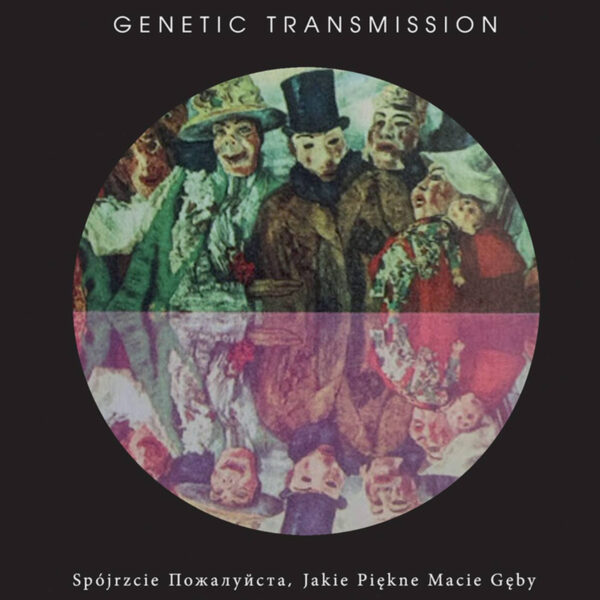 Here’s the latest in an ongoing series of Genetic Transmission reissues from the Polish label Zoharum, of which the previous four items have been noted in 2017 and 2018. Spójrzcie [Pozhaluysta], Jakie Piekne Macie Geby (ZOHAR 169-2) has a detail from a James Ensor painting on the cover, a Lautreamont quote printed inside, and has been rescued from Die Schöne Blumen Musik Werk, the label which Tomasz Twardawa founded in the late 1980s to publish his own work and that of other Polish industrial types.

While I may protest publicly all I like about how “industrial” is just not my cup of liquid plutonium, I still keep getting sent records like this one, and find in spite of my personal tastes admitting to a begrudging enjoyment of the hideous, joyless sounds on offer. Admittedly. this Jakie Piekne is a real oddity compared to the previous gloom-fests of endless pain, in that it represents our man Gen Tran trying out more varied and bolder experiments in style and technique. One major leap forward in this case is that he started to use computer processing around this time (2002), when up till then he’d been a diehard devotee of magnetic tape, amplification, feedback and metal objects. He’s also dipping his zinc-coated toes into the radioactive waters of the cut-up genre, which according to the label notes can be regarded as a move “in the tradition of Nurse With Wound”. 1 In the hands of Genetic Transmission, this means creating faintly nightmarish and disturbing effects with varispeed, disrupting our sense of normalcy with unexpected samples, and using fragments of edited sound to chatter out broken narratives that short-circuit common sense.

Rather than being “surreal” – a term which is often applied to the music of NWW – the most extreme examples here are more like delirious, hallucinatory drug trips, riddled with unpleasant imagery and steeped in ambiguity. Even the title is a cut-up, mixing nonsense Polish with Russian words, and translates roughly as Look (You Are Welcome) What Beautiful Mommys, a phrase all full of false innocence being used to conceal what is evidently a sinister intent. While this album is not exactly a “pleasant” listen, I’m getting a certain buzz from the primitive, near-brutal methods by which the work is assembled – you can see all the joins in this sewn-together monster, and Genetic Transmission likes to keep hammering away remorselessly at his theme until the point is made (or even hammered into the dirt). I’m always in favour of a slightly obsessive approach to tape assemblage, so this scores points with me. Indeed given the very strong and jarring juxtapositions on offer, one might say the more accurate comparison is with Bladder Flask rather than NWW.

In all, this is quite a different kettle of mercury from the grim, murky noise of Gen Tran’s earlier releases, and a more complex picture of the fellow is slowly beginning to emerge. From 6th December 2018.