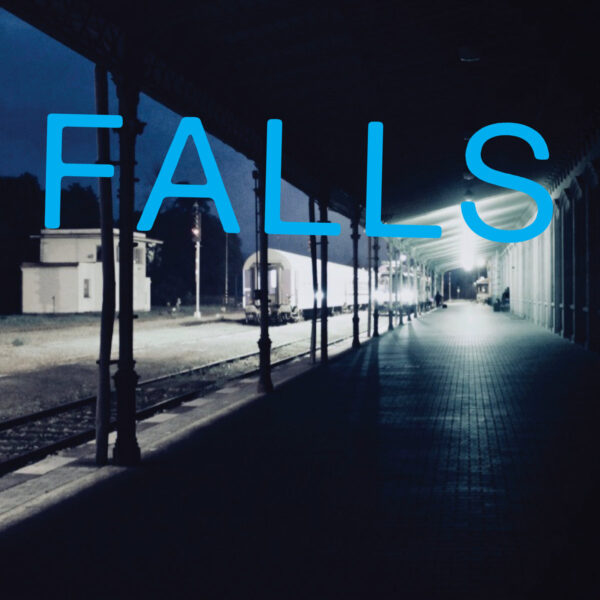 Superb record of contemporary synthesiser music and noise is Falls (MIKROTON CD 87), produced by the team of Lars Åkerlund and Eryck Abecassis. On it, they’re attempting something rather edgy and potentially dangerous to do with “instability”, and aim to induce hypnotic trance states, about which more shortly. Swede genius Åkerlund came our way not long ago on the superb split LP released on Fylkingen as FYLP 1037 with Zbigniew Karkowski, a release which prompted me to look into that partnership’s history a little bit (which goes back to the late 1980s when they made a record for Radium 226.05). I enjoyed that “jet-black dark droner”, and even if Lars’s side sagged a bit, he more than compensates for it today. As for Eryck Abecassis, he is a French composer with a background in theatre, cinema and audio installations, and his career path has moved from working with the orchestra to plugging jacks into the sockets of his modular synths. For instance, he used the Chrysalide to remix Kazuya Ishigami’s Canceller X album, which we noted in 2018.

On Falls, we have one long 30-min track and a number of shorter ones, all generated using modern workstation tools such as Ableton, various modular synths, and midi-controllers…plus a brand of synth called (wait for it…) Dark Energy, a model produced by Doepfer in Germany. This monophonic beast, and its successor Dark Energy II, is an old-school pulse-generating machine with waveform switches and knobs a-plenty for twitchy fingers to manipulate. At least one review characterises this squat brute as producing an “edgy” and “wild” sound, qualities which I guess Lars Åkerlund and Eryck Abecassis were in pursuit of with this release. They explicitly want to reproduce the effect of a “dream machine”, and welcome the possibility of inducing hallucinations and altered states with these hypnotic chattering sounds; part of the strategy involves a certain loss of control on their part, and there are several moments on the record where the machines do indeed appear to be taking over the situation, asserting their own mechanical brain-waves over those of their masters. Me, I like the bad-tempered atmosphere of the whole thing, and the rough, abrasive textures; near-unpleasant abstract barks that spit, sizzle, and rub up against you like an unwelcome wild animal visitor (e.g. cobra snake, feral cougar, grizzly bear). Some of the tracks exhibit very extreme dynamics, high and low ranges, shocking shifts and leaps up and down the scale, working to a system that only our two creators understand.

All of this points to a fairly uninhibited mindset at play for the preparation and performance of these works, a near-joyous spirit of exploration which goes hand-in-glove with the “uncontrolled” part of the equation. Once they signed up to the dictum of the unstable platform and the rocky ride through analogue Hell, our two plucky explorers did not renege on the deal, and stand by their decision to follow it through to the end. My personal preference is for the shorter, shocking bursts of crazed and illogical energy bursts, such as ‘Ruak’, ‘Aurk’ and ‘Kaur’ (yes, many of the tracks are anagrams of each other), although we must single out the long track ‘Aruk’ which outpaces its brothers at a lengthy 30:32. This one bucks the trend for startling effects, and instead produces a single-minded helicopter whirligig attack (or perhaps an insane motorboat with kniving blades) which grows in volume and intensity as it proceeds, generating much alarm and consternation in listener’s mind. It may even out to a steady drone, but it’s by no means a soothing one; the sense of disaster is never very far away.

Sergey Kolosov’s cover photo, perhaps treated to emphasise the harsh white light of the railway station, is a most apt visual analogue for these sinister pulsations and vibrations. A generally intense listen for the most part, and only the relatively sedate ‘Ukra’ offers any respite from these stern, relentless, audial lacerations. Released in October 2019.