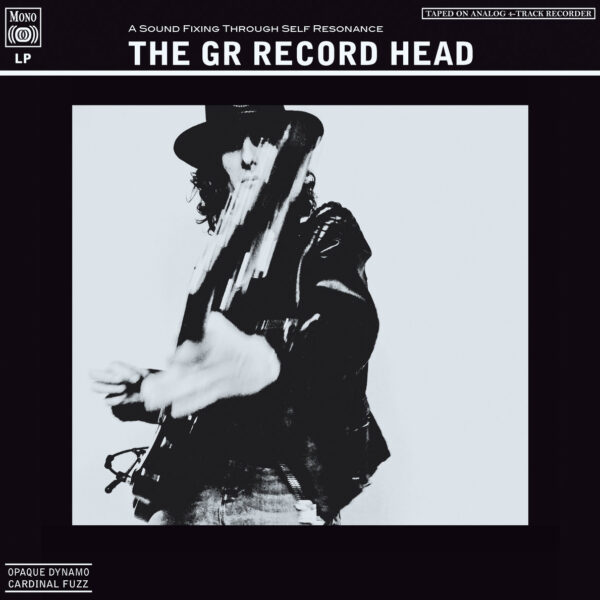 We’ve heard from French guitarist / musician GRegory Raimo a couple of times now, first in 2013 with his A Reverse Age (“a glorious eccentric and fiery recording of avant-rock solo antics”) and again in 2017 with Propel Tension on Polyester Base (“enriched with a kind of noxious energy, like black slime oozing towards you…”) So we’re delighted to get his latest vinyl slab in the form of The Gr Record Head (OPAQUE DYNAMO OPADYN04-GR02 / CARDINAL FUZZ CFUL-0160).

Where his previous release felt like ultra-rockabilly fed through 1960s punk and garage rock strains, for today’s item he’s connecting with his Hendrix and Beefheart roots…for the former, there’s not only scads of psychedelic guitar noodling excess on the record, but also the cowboy-gear look he’s adopting on the cover photos, with denims, black leather and a tall hat…I think there’s at least one photo of the Jimi Hendrix Experience wearing cowboy outfits 1, which reminded me of this. The Beefheart spirit surfaces on a few tracks where he vocalises his bizarre songs, such as ‘Spray of Punitive Fumes’ and ‘My Returning Sound’, where his nasal wail emulates the Captain’s blues stylings crossed with snotty punk snarls. Just about every song is taken at the same restless tilt, the musician (playing all instruments himself) crashing along with wild abandon and making space for his unstoppable solos. When he gets in the zone, he can’t seem to stop riffing, whether on organ or lead guitar, and as his own rhythm section he puts down a simplistic no-frills beat which is just perfect to support these demented explosions of unreconstructed rock moves.

Some might say that GR’s songs kinda lack shape and form, but this is precisely why they work for me – none of that nonsense such as verse-chorus and middle-eights getting in the way, instead allowing him the freedom he needs to stretch out into the guitar-rock omniverse. The package this time is doing a lot to emphasize the sound quality of the record, using flowery phrases and inserted lines of whimsy wherever possible, such as “roll of bass / suction beat”, “corroded strings and rhythm pump worship at the organ channel”, plus there’s the LP’s subtitle “A Sound Fixing Through Self Resonance”. The self-important credits remind me of the credits Robert Rodriguez awards himself on his movies, while the idea of “self resonance” suggests that he sees his very body as an amplifier / conductor of the music in some way. He also stresses the analogue / mono aspects of the recording, pressing and production, reminding us of the lengths you have to go to these days to get an honest Sun Studio sound onto vinyl. A retro delight of unhinged riffage and howlery…from 16th March 2020.