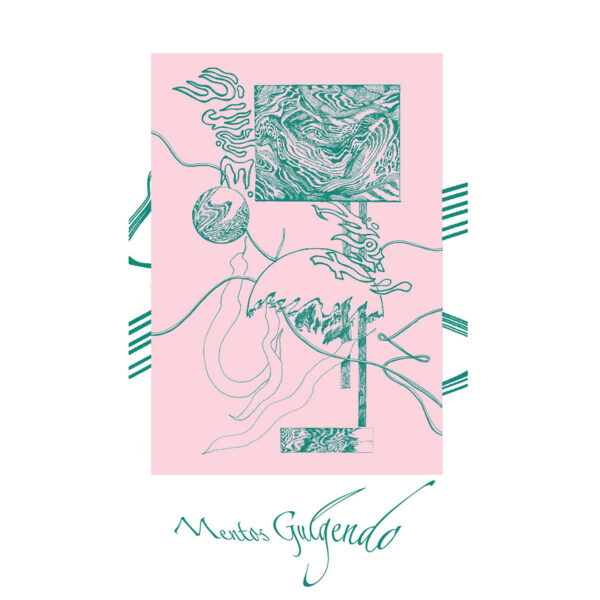 Got a couple of new cassettes recently from the Polish label Endless Happiness, sent to us by label owner Filip Marcinkowksi in Warsaw. You may recall this label brought us the Disarm album, a team-up between Adam Golebiewski and Thurston Moore.

The first cassette is a rather exotic and dreamy cassette by Mentos Gulgendo, self-titled (ENDLESS HAPPINESS END#9) and with a pink and green cover adorned with cryptic shapes and drawing by Masia Debska. This is the duo of Antonina Nowacka and Bogumila Nowacka – the former is known to us from that splendid album by WIDT released in 2016 by Zoharum. Re-reading this now, I recall she is mainly a visual artist and film-maker and I personally welcome it when artists make their unique forays into the worlds of music and sound. That item happened to feature her golden voice (looped, reverbed, transforming her vocaloid shapes dramatically), but today’s item is organ drone for most part. They did it using a 1970s Godwin organ, apparently a popular item during that decade emanating from the manufacturer in Italy who later scored a hit with the unusual Guitar-Organ device…but that’s another yarn. I assume the Godwin would have been not unlike the Lowery organ in this country, producing rather tasteful and cheesy sounds in the chintzy front rooms of many lower middle-class homes.

Be that as it be, here it sounds both groovy and gorgeous and deployed in the service of art music yoked up to a conceptual idea, about which more shortly. The players make use of those dampeners and diapasons to create lovely filtered effects, and while at times these simple drones and weird abstract melodies may strike you as “minimalist” in their general tenor, there seems to be something slightly more weird going down at the Family Allotments “Kaloria” where this was recorded. I was mesmerised by the single-minded continuum of ‘Ionesendr’ for 17:22, especially as it drew nearer to its epiphanic finale. But for me the main event is ‘Suruliandr’, a new calling point for when I want some eerie off-kiltre spooksoid tunes for Autumn nights delivered with eccentric intervals in the melodies and odd unexplained sounds.

The underpinning concept is likewise an odd one, and even when you read their explanation you’re no less mystified. “The theory,” runs their statement, “states that our universe has been created by the representatives of the cosmic madhouse.” This isn’t perhaps an especially new trope – the idea of an insane universe with a madman in charge has blighted the pages of most 20th century literature, starting with Beckett, but in this instance our two Nowackas have tied the idea to a fictional philosopher they invented, named Mentos Gulgendo. The theory goes on to unpack into a string of hard-to-fathom ideas about electromagnetic waves and forces that can penetrate structures – I’m already lost – but I will go along with anything that proposes that our notion of “identity” is nothing more than “liquid, unsustainable fat.”

Our plucky team round off the evening’s entertainment with a vocal rondello from Antonina which sounds like the controlled operatic ravings of a female loon, and as such is entirely in keeping with the theme of the release. She gets increasingly demented as her voice grows more stangulated. I seem to recall hearing that same spirit of wild madness on the Zoharum record. Long may Antonina Nowacka continue to warble in this inspiring way. A fab record of musical absurdity and oddness. For those who want more of this – and I know I do – be sure to look for the companion release on cassette with same title and similar cover art, released same day on the UK Slip label. Arrived 7th September 2020. Also tune in to a later post, where we will review the Bill Orcutt cassette Warszawa.