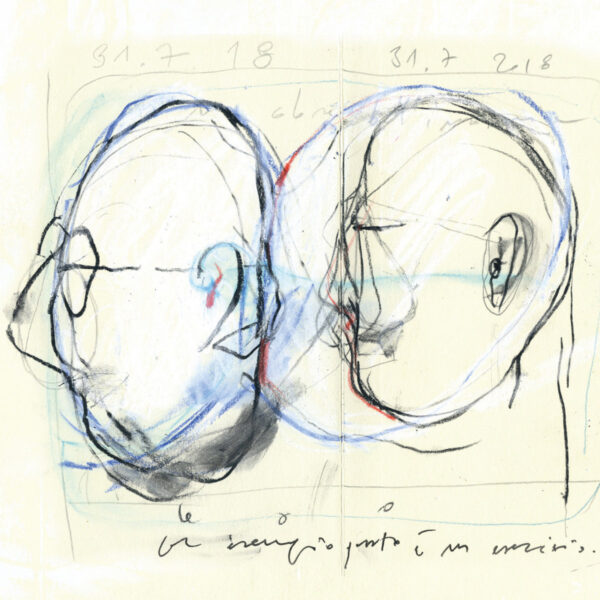 Four new items of music, covering many modes from free improvisation to formal composition to sound art, from the Slovenian label Inexhaustible Editions.

On han jiae (ie-024), we have the pairing of Sebi Tramontana (trombone) with Guilherme Rodrigues (cello). They opt for short and snappy pieces on this album and I think the whole thing might be less than half an hour long. Just two “voicings”, yet they find and create many interesting sonic worlds to explore through this simple set-up. Of the two, I sense that Sebi sits on the more romantic and juicy side of the fence, and frequently makes his trombone “speak” like a human voice, with florid and growly effects, repeated phrases, grumbly gripes, and expressive swooping tones. Guilherme sits slightly over to the right of that fence and goes for crisp, brittle sounds, sometimes choosing to act like a percussionist with his stabby bursts, and is not afraid to use glissandoes, drones, and other devices. In this way, both players exhibit a demonstrativeness which is highly entertaining, and acts as an antidote to the stiffness and rigid pose of the Radu Malfatti school. Sebi Tramontana, originally from Sicily and now living in Berlin, has been active for a long while and appeared in many duo and large-group settings, and I’m a tad surprised I haven’t heard him on any of the records he appears on. Portuguese player Guilherme Rodrigues has appeared on numerous Creative Sources releases, and we heard him playing the viola on Golden Towers and Electric Frictions with Miguel A Garcia and others. Of the four in today’s envelope, this one is your best bet for enjoyable and entertaining music. 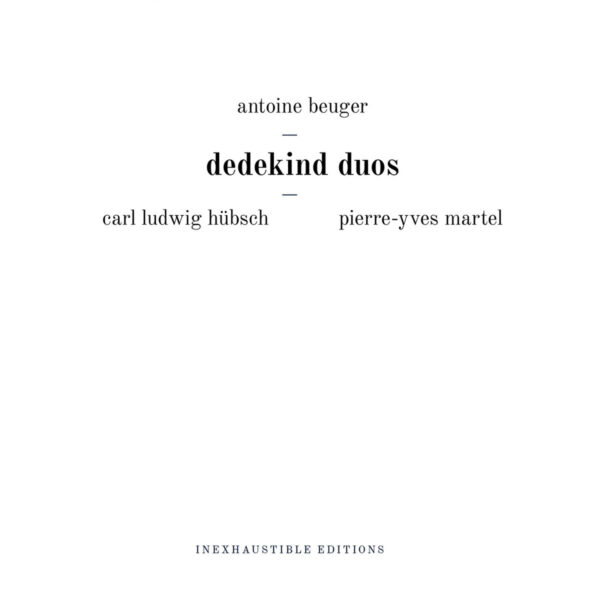 Dedekind Duos (ie-023) is played by Carl Ludwig Hübsch and Pierre-Yves Martel, both fellows associated with free improvisation, but this single 49:33 piece is in fact a composition written by Antoine Beuger. We last heard this Wandelweiser person on to the memory of, released in 2017 on this same label, and with a very similar cover design of bare-bones typography. Hübsch plays the tuba, Martel plays the viola de gamba (one of the few musicians in this genre who does, I’ll wager), and the composition creeps along in a low-key, slow-moving mode, with long tones and tense silences to further the listener’s contemplation. It’s a flawless performance, each immaculate minimal note played with precision and care and landing in just the right place; less disjunctive than other Wandelweiser pieces I may have heard, this one gradually coalesces into strings of coherent sentences, and an essay (if not an entire book) emerges in musical form.

A photo of Julius Wilhelm Richard Dedekind appears on one panel of the six-panel digipak; he was an historic person, a German mathematician of the 19th century who made important discoveries that paved the way for definition of “real numbers”, a concept which I would expect is beyond me as I can barely manage to count up to ten on my own fingers and toes. If there is a numerological concept underpinning Dedekind Duos, it may have something to do with what Beuger calls “the intrinsic or ontological structure of “two”, which is disjunction”. However, I’m taking his words out of context. In his mini-essay, he muses about his work of composition, and confesses that he doesn’t regard his scores as finished, ideal pieces which could be read and performed by any musician; rather, he describes a score as “a confidential letter to a friend”. This doesn’t mean that he only elects to work with sympathetic musicians, but it does imply that he’s hoping his message will fall on sympathetic ears. I like this idea, which on one level represents a departure from the norms of classical music, especially with regard to sheet music, printed scores with their representations of dynamics, metre, and so forth; they are examples, perhaps, of a very coded way of working which our culture has been conditioned to accept as a normal representation of musical language. On another level, Beuger is admitting that his music is not for everyone, and (like many artists before him have discovered), creating art is like sending a message in a bottle. Of the four CDs, this one will satisfy your philosophic leanings and provide intellectual fodder to the brain. 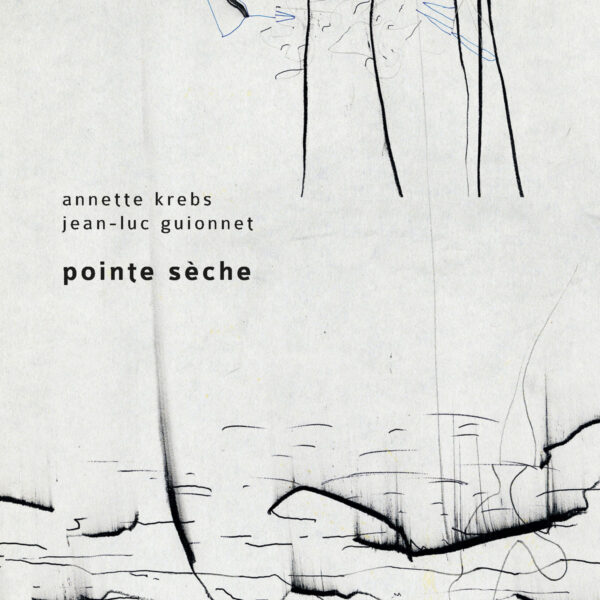 On Pointe Sèche (ie-022), we have the excellent Jean-Luc Guionnet on the church organ, along with Annette Krebs who is credited with playing “konstruktion #4”. The organ was in St. Peter’s Parish Church in Bistrica ob Sotli, Slovenia. I’ve got a lot of time for Guionnet generally, especially with his recent large-scale pieces which have attempted to investigate architectural space in various ways, with sets of players distributed strategically around unusual performance spaces, but I’ve also keenly followed his work on the church organ. He has made it into something all his own. I was very struck by his idea that he sees the instrument as something that has all the possibilities of a mixing desk. I’m unsurprised to learn that he’s been playing historic organs in churches all around the world for the last 20 years.

As to Annette, her konstruktion #4 is the latest version in a string of devices she’s been working on ever since she first elected to take her guitar to pieces; it’s pretty much an assemblage made of “highly amplified metal pieces, strings, objects, and microphones”, and while that may sound not too far apart from Keith Rowe’s tabletop guitar, or something similar which Fred Frith may have built, I am certain that Krebs has evolved and built something totally unique and that fits her way of playing exactly. These 2018 recordings are extremely long in form, with three pieces occupying well over an hour of listening time; accordingly the work unfolds in a very cryptical and gradual manner, with strange and subdued tones creeping out the shadows and shapes revealing themselves. I admire the high-minded ambitions of both these musicians: Krebs had to build her own instruments in order to do things that could not otherwise be done, using conventional means; while Guionnet goes even further, seeing all of his music as a means of “testing reality”. It’s as though every note he plays is asking a probing question about the environment around him.

All of these elements may account for the very odd and darkly intriguing mood of this excellent album. Decorated with drawings Guionnet; the title translates as “drypoint”, which is a technical term used in engraving and etching, but may mean something completely different in this context. 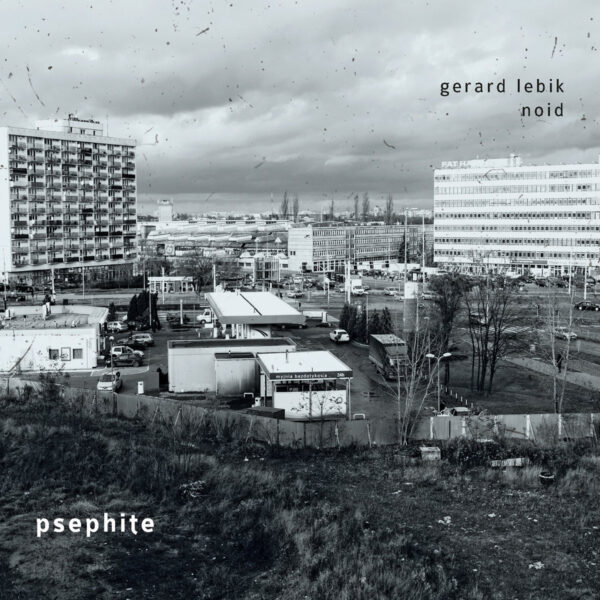 On psephite (ie-020), we have another duo – the Austrian cellist Noid, and the Polish guy Gerard Lebik who plays his “sound objects” using amplification and a mixing desk. Noid – real name Arnold Haberl – made a real hit with us on the Foreign Correspondents two-disc from Mikroton in 2015, where he not only bowed his cello but also explored the jinghu, plus turned in interesting field recordings captured in the east. These recordings were made in a Polish studio as far back as 2013, and all the pieces have titles which seem to refer to building materials, like ‘basalt pebbles’ and ‘roof slate’, plus there’s a photo of a modern urban sprawl on the front cover served up in no-nonsense black and white. I say this as I think these are hints to the very “physical” nature of this psephite record, thinking that it might be an attempt to say something about the world through a steady contemplation of facts, even if that process involves gazing at a brick wall.

As such, this one probably sits more in the “sound art” camp than in the genre of free improvisation, and the music tends to bear this out, both players more concerned with generating and exploring unusual sounds than with creating a musical dialogue. Non-specific abstract drones, crackles, creaks and hums abound, and the overall texture seems very hard-edged to me, full of brittle playing and solid shapes, textures as smooth as well-rendered concrete. Another noticeable feature is the sense that there is no direction or movement to the sounds, and rather we’re situated in a site much like a building site, looking around at materials and trying to understand what the environment is. This is not to say that psephite is boring, quite the opposite; it’s a very careful and detailed study of…something.