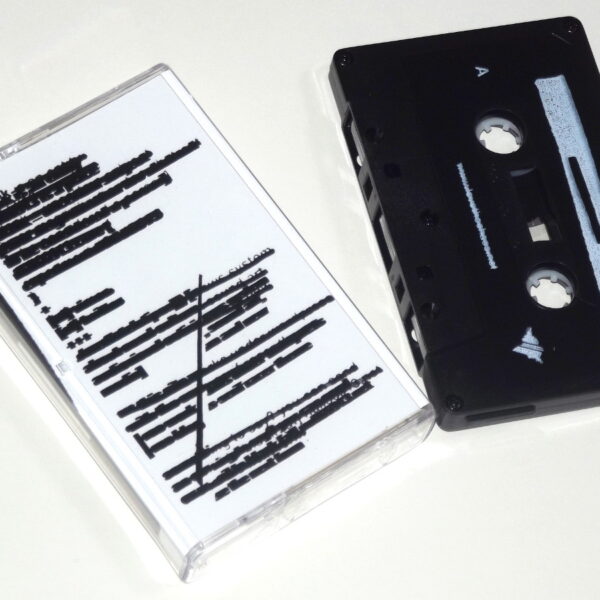 Conceptual process piece of the month is a cassette tape (LOVE THE CHAOS LTC016) by _blank, released on the Spanish experimental electronica label lovethechaos. Every so often we hear from a sound artist who has hit on the idea of “playing” non-audio files in the computer; it seems to me I have encountered many instances of it. For instance, Keith Moliné did it with Andy Diagram on Ley, and Yann Novak did it on Presence at the Torrance Art Museum. In this instance, _blank has taken 186 photographs of cassette tapes, saved them in the JPG format, and then exported this to the RAW format – which happens to be compatible with sound editing and image edition applications. When we spin the tape, we’re “hearing” image data. What emerges is flat and pointless process noise; no shape, no pattern, and resembling an irritating form of white noise interference. To be honest, it sounds very boring indeed.

The work is bolstered by a short art history essay on the theory that “colour, light and sound are intrinsically related”, as originally set forth in the works of Pythagoras and Aristotle. We are invited to see parallels in the work of Renaissance scientists (Newton) and painters (Arcimboldo), before jumping ahead to 20th century experiments in the area of avant-garde cinema by Lis Rhodes and Guy Sherwin; also Daphne Oram and her Oramics system, and inevitably the UPIC tool developed by Xenakis. Not unrelated, I suppose, would be the GenDyn program with which Russell Haswell and Florian Hecker have experimented.

I’m quite prepared to believe that colour, light and sound are indeed intrinsically related. But I also doubt that this theory can be demonstrated by this random recasting of computer data. By migrating image data into another format which might be playable on another digital media rendition tool, you aren’t experimenting with the actual physics of colour or sound (which is what Newton understood); you’re merely tweaking file format specifications, and swapping data between players. It says more about the limitations of computers than anything. If you succeed in creating halfway-interesting sound art this way, I would suggest it’s more by luck than design. Still, _blank is unperturbed; these experiments are also finding their way into other avenues now, including cinema, with their “ongoing research on the boundaries between film and video.” The cassette itself is issued in a cover where all printed words (except the name of the creator) have been struck through, as though we had hold of a heavily-redacted top secret document from the CIA archives.