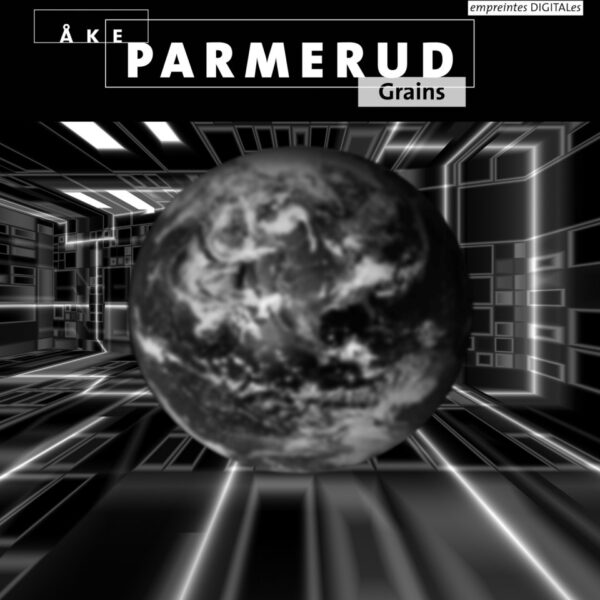 We have enjoyed previous releases Growl and Necropolis by Åke Parmerud, the Swedish electro-acoustic composer, and now we have Grains (empreintes DIGITALes IMED 18150), the latest collection for this label. As before, we have the monochrome high-contrast sleeve art which appealingly plays with digital “textures” and explores its own imaginary spaces. This time we’re hearing some earlier gems form his 1990s catalogue. The main event might be ‘Grains of Voices’, a 1994-95 composition that was commissioned by Swedish radio as a dramatic form of sound-art; we might consider it radiophonic almost, were it not for the lack of a clear linear narrative. Instead, Parmerud is making a generalised statement about the diversity of the human race, by using sampled, found and recorded voices from around the world. He intends thereby to present as much information as he can about the human spirit in a deep / wide sweep; I like the idea it might be seen as “vocal graffiti”. It’s all about different languages and cultures, yet the basic idea is to reveal some commonality, something about our shared humanity. On paper, this may sound a bit “worthy”, like some committee-designed UNESCO statement about mankind, but sonically speaking it’s a compelling jumble with plenty of rich detail; and it refuses to draw any conclusions about what these artificial patterns in sound might mean. As ever with this composer, the craft of assemblage is pretty immaculate; not a wasted moment, lots of concrete events; it’s as much a vocal mosaic as a wall of audio graffiti.

More human voices on ‘Les Objets Obscurs’ taking us even further back to 1991. This is intended as an “audio riddle” in four parts; at one level, we’re invited to guess what we might be hearing as we work through these four short works, plus there’s a friendly French-speaking woman adding some context at the start, with a further textual riddle (I think she’s pretty much asking “what am I?”, but it sounds so much better in French). All of this was done to pay homage to the INA-GRM foundation, which Parmerud respectfully regards as a “very honourable institution”, and which prompted him to try and emulate the historical traditions of musique concrète. Duly noted, but I would say he’s also emulating the surrealist René Magritte at his most playful; I’d say it’s legitimate to “read” a Magritte painting as a visual riddle, of sorts, and everyday objects were massively important to his visual lexicon. Parmerud’s suite contains the “solutions” in the final part, but the answers conceal more than they reveal, and are also intended to set us a new riddle, one without an answer. How metaphysical!

Still more voices on ‘Alias’, a 1990 work which, in a very oblique manner, is attempting to say something about the life and music of Carlo Gesualdo. This Renaissance composer of madrigals is the gift that just keeps on giving, not just to lovers of that genre but also to composers and conceptualists. In 2017, for instance, we noted Alessandro Bosetti with his Gesualdo Translations work, a very bold statement using amateur singers that really challenged our received wisdom about the “chromatics” that have made Gesualdo so famous. Parmerud’s take on the subject is a bit more elusive; the first part remakes a John Dowland song, in order to raise questions about that most fraught of subjects, the relationship between the creator and the work of art. The second half samples some Gesualdo motets, fragments and processes them in an electro-acoustic way and blends in music from the first half, thereby attempting to x-ray the inside of Carlo Gesualdo’s brain. Highly effective; even if you have no interest in the subject matter listed above, the musical process here does indeed create convincing impressions of the way the human brain might operate. Fascinating.